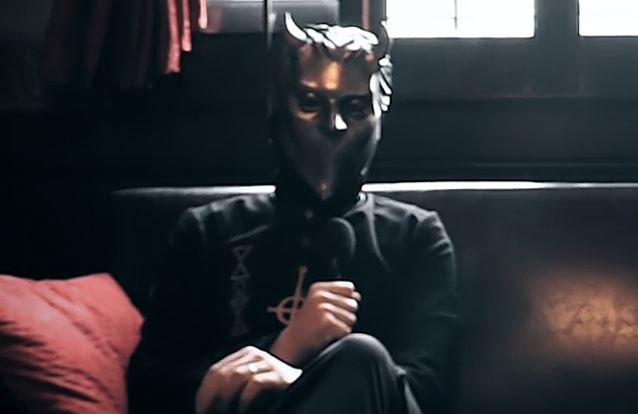 Swedish occult rockers GHOST will release new EP later this year and will follow it up with a new round a touring featuring a brand new stage show.

Speaking to MetalSucks during GHOST's spring U.S. tour, one of the band's Nameless Ghouls stated about the group's plans for the coming months (see video below): "We're gonna finish up this tour in Albany, which is on May 22nd, and then our European tour starts May 27th. And that stretches into right in the beginning of July; so that's gonna be festivals. After that, we have an EP coming out. That's gonna be great, because that's gonna, sort of, re-energize the whole cycle. So there's gonna be some new material, we're gonna have a new stage show. So it's gonna be a completely different setting. Then we're gonna terrorize you with that up until next year."

Asked how big he envisions GHOST one day becoming, the Nameless Ghoul told WNOR FM99: "It's hard to fully set a parameter of, 'This is exactly how big we wanna become.' But I think that the one goal that we want to achieve… I mean, set aside a lot of the personal, I guess, monetary things that you want to achieve as a human being; you wanna be rich and you wanna be that… But when it comes to the size that I've always wanted us to become or turn into, it's basically a full-production band that can do almost anything that we need in order to fully accomplish the show that we've always had in mind. Obviously, it's not exactly the same vision from eight years ago — it's grown — but the idea has always been for it to be a full-production arena [show]."