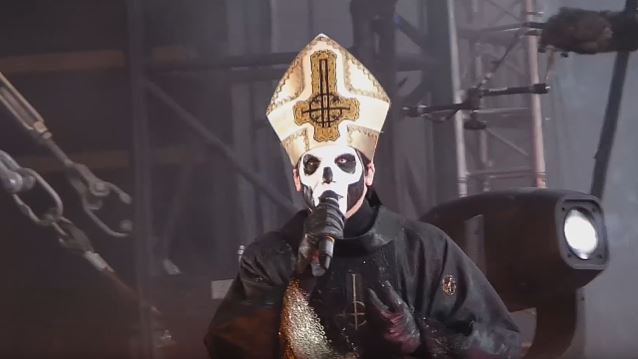 One of the Nameless Ghouls from Swedish occult rockers GHOST was interviewed on the October 20 edition of SEX PISTOLS guitarist Steve Jones's radio show, "Jonesy's Jukebox". You can now listen to the chat below. A couple of excerpts follow (transcribed by BLABBERMOUTH.NET).

"On this album cycle, the last year… We released the album in August [2015], I think it was, and by the time we're done in the beginning of next year, we [will have] done 220 shows, I think. But, I mean, we don't do 220 shows straight; so it goes in maybe four weeks and then there's a couple of weeks off, and then it's six weeks and a couple of weeks off.

"I love touring. I've always felt that touring was something that I [would like]. And as soon as I started, I understood that I don't wanna live my life any other way. But I don't wanna do it all the time. I wanna… And I guess this is very common within musician circles that you wanna have the tour booked, you wanna be home, you wanna feel that you're home, but you wanna know that you're going away. And you wanna be on tour and you wanna know that you have a home to come home to. And then that's how I wanna live my life for the rest of my life — until I die."

On the state of the music industry:

"I think it's better now [than it was a decade ago] in the sense that you do have the streaming and all that. I think the dark ages of when it was just flying in the wind is gone, so that's good. But for better or for worse, the bad thing now is that we're back in the '50s, in a way, where it's only singles. And all labels are just fighting for streams, so the only thing that is important is that you make good songs. So it's good, because you have to write… every song needs to count, and you don't overswamp the whole market with shit. But, yeah, I like making records. There. [Laughs]"

"Popestar" was released on September 16 by Loma Vista Recordings and is available online and in record stores on CD, vinyl, and digital. The surprise five-track offering features leading psalm "Square Hammer" and also contains covers of selections by ECHO & THE BUNNYMEN, SIMIAN MOBILE DISCO, EURYTHMICS and IMPERIET. "Popestar" was recorded by Papa Emeritus III and his Nameless Ghouls in Linköping, Sweden and produced by Tom Dalgety (PIXIES, ROYAL BLOOD, OPETH).