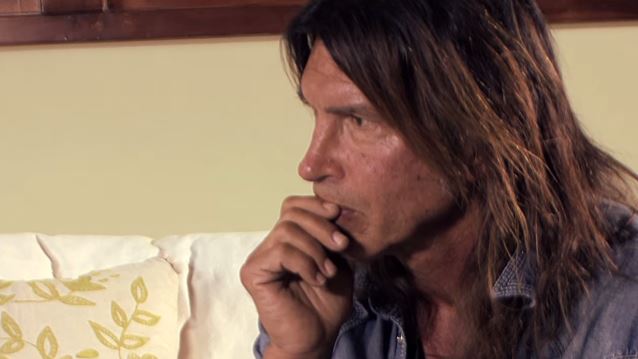 According to Verde Independent, legendary guitarist George Lynch's (DOKKEN, LYNCH MOB) "Shadow Nation: Under A Crooked Sky" movie, a thought-provoking documentary that explores the trials and tribulations that face Native American Indians in our world today, will receive its world premiere at 9 p.m. on Saturday, September 5 at the King George Mine site of the third annual Jerome Indie Film & Music Festival in Jerome, Arizona.

Speaking about how the "Shadow Nation: Under A Crooked Sky" movie came about, Lynch told HNGN: "Vinnie Nicastro and myself — he's a drummer and an environmental and social and economic justice activist and has been for most of his life — we became friends and started working on something. We weren't sure what it was, but it started with music and ideas. We'd talk into the night and come up with all these grandiose plans to save the world and change the world [laughs] with the power of our music somehow, but it led to sort of just a little handheld camera documenting what we were doing, going around to reservations in California and doing these impromptu jams. So that was fun but it was all kind of a mess and we had to bring a generator and amps and a little camcorder from Best Buy. It went from that to we got Gabe Rosales in the band, who was with the 'Smoke This' version era of LYNCH MOB in 2000, a fantastic bass player and also a heavy-duty activist and sort of evolved into that in recent years... Lastly, we pulled in Gregg Analla, a singer from New Mexico, who understood the ideology behind the music and an unbelievable singer. We started this musical thing at first and then we started documenting what we were doing thematically, and then we thought let's put this whole concept into play and we believed this could be a documentary. We didn't have a clear idea of what it was about... What it is really is an explanation of human nature through the lens of the Native Americans. It really could be any indigenous group. So we spent a lot of time traveling to reservations and playing music and discussing issues and talking with talking heads, everyone from American Indian leader John Trudell to Noam Chomsky to going down to Texas to talk to Ted Nugent — not that he shares our ideology, but he had some affinity for Native Americans and primal things and things like that."

Regarding his future plans for "Shadow Nation: Under A Crooked Sky", Lynch told Guitar.com: "We've got a lot of business to deal with to get the film out to the larger population. Not that anyone's trying to make a lot of money on it or anything; there's not a lot of money to make. It didn't take a lot of money, compared to what you traditionally spend on films. In five years, I think we spent $150,000, which is nothing for a film. But that's not why we made it. We made it to pique people's interest, and bring up things that need to be brought up, people's opinions. And hopefully energy will go into changing policy towards Native Americans, and the greater population. The same thing that applies to anybody applies to all of us: truth and justice is truth and justice across the board."