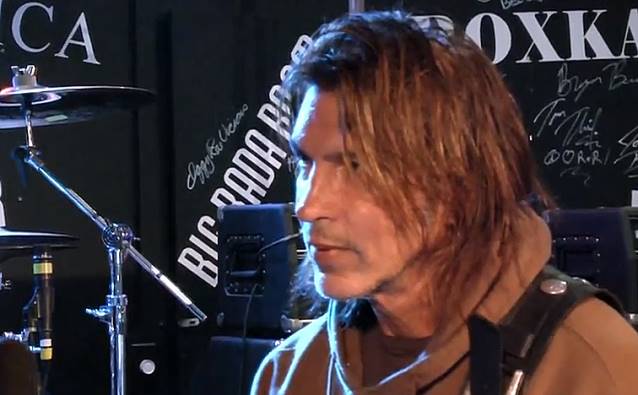 Legendary guitarist George Lynch (DOKKEN, LYNCH MOB, T&N) was interviewed on the latest episode of the "Talking Metal" podcast (web site). A couple of excerpts from the chat follow below.

Lynch: "When you are in the music scene here, especially in Southern California, you run into everyone, everybody loves everybody, it's a mutual admiration society. You're hanging out, you are playing gigs and you run into your buds and your friends, and invariably, with all of us, it's, like, 'Let's form a project, let's do something together,' because, ya know, we all want to play together and usually it never goes anywhere but this time it actually did. It's really amazing. Things lined up. Doug has been... The first time I heard KING'S X with 'Out Of The Silent Planet' and 'Gretchen Goes to Nebraska', oh, to me, he was the benchmark. This is the guy that I was born to play with, ya know? He has got it all. He comes from gospel roots, he's got the blues thing, he just does it all. I just knew would be a natural fit. Doug is so good he's a natural fit with anybody. He is a self-contained machine. He's got that very unique bass attack and sound and obviously his vocal styling. He is a poet. He is a great lyricist. A great frontman, the whole nine yards. And Ray and I have been in other little projects and have done things together. We would always touch base but never really got serious. I don't remember exactly how this all fell together. We all have limited time being that were all in other projects but we said, 'Let's really, really do this and quit talking about it.'"

On not getting the gig as a guitarist in Ozzy Osbourne's band in the early '80s:

Lynch: "Initially, the one negative I heard from their camp was that Sharon thought my guitar looked like a booger. I had this green and black Tiger, actually the first Tiger I had made before I made my yellow-and-black one and I thought it was a pretty silly reason. Also, Ozzy came into my hotel room at one point and he said, 'Why did you cut your hair?' He was really bummed that I had short hair. I was actually doing a day gig as a liquor delivery driver and I couldn't have long hair, so I had to cut my hair. I could've bought a wig but he was bald at the time, so his argument didn't carry a lot of weight with me. So there were those two things. Yeah, I think it was image for them. I had the songs down and I felt confident that I could play everything like I needed to, especially once I got comfortable. I think really the linchpin, no pun intended, in me not getting the gig was [drummer] Tommy Aldridge's opinion of me, and I think he was right about this — he thought I was this kind of animal that really needed to be in my own band, that I'm not one of these guys fits into anyone else's project very easily. He is right about that; I've never played in a cover band or under anybody else's rules..."

On the recent attempt to reform the classic DOKKEN lineup:

Lynch: "Well, it came up again for the fourth or fifth time in the last eight years. We made a very concerted effort to see if this could actually happen, because we had some really great offers float in and it would've been a good basis for us getting back together even for a couple of months or for the 30th anniversary of 'Tooth And Nail'; maybe we could re-do that record, I don't know, write a couple more songs or do some meaningful touring and do a DVD. In our past experiences of trying to get everyone together to do this, what would happen, and invariably everyone would say yes, including Don [Dokken], and we'd all agree to the major points, which is for the three of us — Mick [Brown], Jeff [Pilson] and myself — and it was nonnegotiable, is that we split everything up equal as we did in DOKKEN when were together in the '80s. That's what works. So we have this agreement on the phone and what would happen in the past is Don would change his mind in the 11th hour after we've done all this work to move this thing forward. We would have managers, agents and all these people flying around doing all this work based on these promises that Don would then renege on. So what Jeff and I decided this time is we will put a timetable on it. We said we will need this in writing Don before we go to step two, we are not going to sit around and wait forever for you to change your mind. That timetable came and went and then, of course, he changed his tune and said, 'I want a bigger piece of pie or am not doing it,' so it is off the table so that was the end of that."

You can listen to the entire podcast using the audio player below.