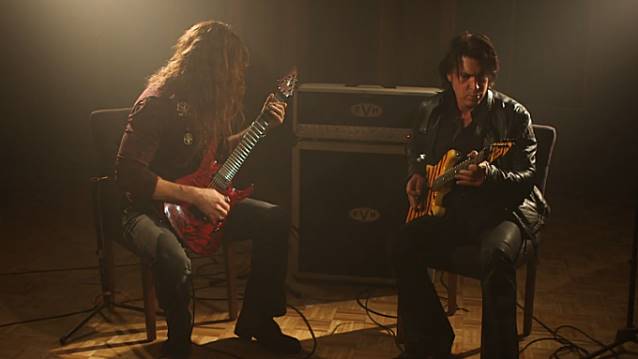 The thirteenth episode of "Metalhead To Head", a web-only show where metal masters sit down together for surprisingly candid conversation and plenty of one-time-only music demonstrations and collaborations, can be seen in two parts below. The episode features George Lynch (DOKKEN, LYNCH MOB) and Chris Broderick (MEGADETH). The duo get deep into their history in metal and their influences, with Lynch stating that he took in a lot of influences when he was younger through "osmosis" — simply by listening to his favorite bands and playing along to their records.

Lynch steers the discussion toward how artists evolve as well, saying "I think it's wonderful when fans allow us to change." He notes that many fans are "conservative," wishing that their favorite bands would re-write the same records over and over again, but oftentimes that isn't what the artists want to do.

The "Chris Broderick Pick Clip", which is discussed in the chat, is titanium and made for your right thumb (one size fits all). It's bendable to shape to most thumb sizes. Left-handed pick clips are now available for purchase at this location.

To see all the episodes, visit Fuse.tv.