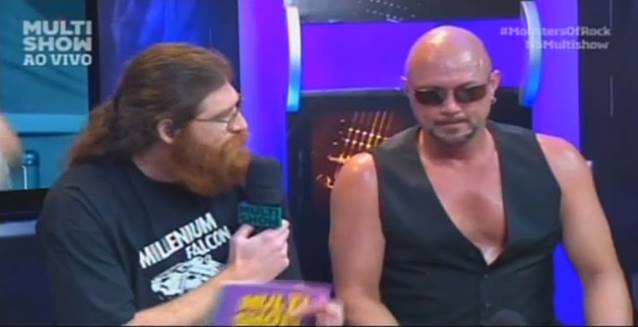 On October 20, the Geoff Tate-fronted version of QUEENSRŸCHE was interviewed on Brazil's "Multi Show" after the band's appearance at the Monsters Of Rock festival in São Paulo. You can now watch the chat below. Also available is professionally filmed video footage of the Monsters Of Rock performance.

During a recent interview with WashingtonTimes.com, Tate was asked if he has noticed any sort of fan backlash due to the split with the other original members of QUEENSRŸCHE. "I hardly have noticed a difference, really," he said. "It's been really kind of smooth sailing. The shows have been well-attended and the energy at the shows is really intense with the band and the interaction with the audience. It's probably actually a little more emotional now than it has been. I think change is probably a good thing."

Asked if it is strange playing QUEENSRŸCHE songs without the other original members of the band, Tate replied: "Oh, not at all, no. Actually, it's a lot more organic now and there's a real camaraderie in the band now. This group of people, we have a real positive kind of energy surrounding the band now that I find really very pleasing. I think that translates to an audience when you're up on stage together and everyone in the band is happy and excited to be there. That translates to the audience. They pick up on that energy too, you know?"

Tate also revealed that he has been "in the studio for the last couple months" working on a new record. He added: "I don't know when it's going to come out yet, probably after the first of the year sometime. I'm not sure yet. [It's] going great, though. A lot of the music's cool. [laughs] I'm enjoying it."

The Todd La Torre-fronted version of QUEENSRŸCHE's new, self-titled album sold around 13,500 copies in the United States in its first week of release to land at position No. 23 on The Billboard 200 chart. The record arrived in stores on June 25 via Century Media Records.