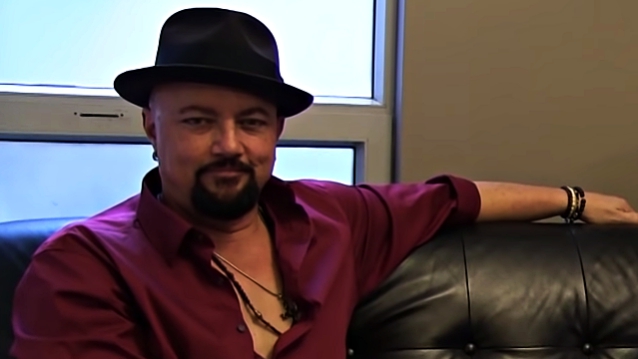 Prior to AVANTASIA's performance in Montreal, Quebec (Canada) on May 23, former QUEENSRŸCHE and current OPERATION: MINDCRIME frontman Geoff Tate spoke with Alan Dixon of The Metal Voice. The full conversation can be seen below. A few excerpts follow (as transcribed by BLABBERMOUTH.NET).

On recording with AVANTASIA:

Geoff: "[Tobias Sammet] has something in mind when he's writing the song, and he typically writes for the singer that he has in mind, and writes something within that singer's range, and maybe that singer's melodic interest. He's very talented, and very easy and wonderful to work with. He and Sascha [Paeth] and Miro Rodenburg are a great team. I've just had a great time — not only in the recording studio, but also out on the road touring."

On the process of tracking his vocal parts:

Geoff: "We send back and forth ideas [in] the virtual studio [of] the Internet, which is great, because you can do so much work that way. Then, when we get close to where we like it, we meet up at a physical studio — in this case, it was Frankfurt, Germany."

Geoff: "I think the band rehearsed for about three weeks before all the singers came. Then we had a week of rehearsals with the various singers. Then we hit the road for the first show — flew right to Slovakia and did the first show."

On how he's enjoyed the tour so far:

Geoff: "It's fantastic. It's a wonderful experience, actually, playing with incredibly talented musicians [and] great singers who just kill it every night. They don't hold back. Nobody's holding back and trying to baby themselves — they just let it go every night, and I love that about the singers and the band itself. The band is so incredibly tight. You listen to the mix, and it's, like, 'Are they really playing?' But they're sweating and they're bleeding. I know they're playing — especially Felix Bohnke, the drummer. He's a madman. Three and a half hours of that. It's demanding material, and he's just laying it down every night. He's amazing."

On the upcoming SWEET OBLIVION release:

Geoff: "It's the name of an album that I did with a wonderful Italian guitar player named Simone Mularoni. He and I put this album together, and it's coming out in a few days. Some of the songs are kind of reminiscent of older QUEENSRŸCHE."

On the future of OPERATION: MINDCRIME:

Geoff: "I started touring the 'Operation: Mindcrime' album in its entirety as a 30-year celebration of the album. It went through 24 countries, and it went a lot further than I thought it would. I'm still doing dates for that album. I think it ends up in June here in North America — I've got two weeks of dates — and then I think I'm finished touring with that, and I can do something else. [Laughs]"

Geoff: "I've made 19 albums now, and they're all very different from each other. I've just always had this sort of motto that I live by — 'no limits.' I definitely didn't want to live my life with someone else's idea of how it should be. I wanted to define my own existence — my own music and my own way of doing things. That's kind of what I've always lived by. I haven't tried to conform or be something else."

Tate is one of several notable vocalists currently touring with AVANTASIA. He appears on the group's latest album, "Moonglow", which was released on February 15 via Nuclear Blast.

Tate's next release will be the self-titled debut by SWEET OBLIVION, his progressive metal collaboration with Italian guitarist Simone Mularoni (DGM), which will be issued via Frontiers Music Srl on June 14.

The apparent final leg of Tate's ongoing tour with OPERATION: MINDCRIME celebrating the 30th anniversary of the legendary QUEENSRŸCHE concept album from which the group derives its name begins June 13 in Harrison, Ohio.