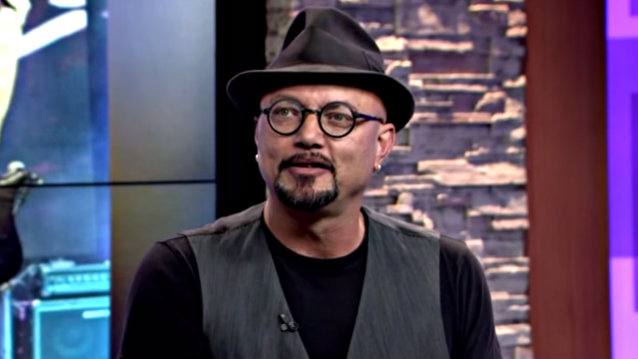 On August 20, former QUEENSRŸCHE singer Geoff Tate was interviewed on the "Daytime @ Nine" lifestyle program in San Antonio, Texas. You can now watch the segment below. A couple of excerpts from the chat follow (transcribed by BLABBERMOUTH.NET).

On the QUEENSRŸCHE "farewell" tour:

Tate: "Well, it's a farewell for me to the name QUEENSRŸCHE. We finally settled our differences with the former band. And they get to keep the name and I get to keep the large amount of money they paid me for it. Which is nice, so that's why I'm taking a year off. [Laughs]"

On what he is going to do when he is not touring:

Tate: "I'm gonna make a new record. I'm going in the studio in the winter to record a trilogy project, which is three records, all at the same time, and then we'll release them over time. But it's a very involved story, in conceptual format, which is what I like to do."

On what his new band will be called:

Tate: "We're calling the new band OPERATION: MINDCRIME. And it's kind of similar to the situation that the guys in BLACK SABBATH went through when they couldn't use the name, so they used the name of one of their more popular records, 'Heaven And Hell', and went out and made new music and toured with that name."