Geoff Tate says that he recently had "a really nice little reunion" with his former bandmates in QUEENSRŸCHE, almost exactly five years after his acrimonious split with the group.

During a July 16 appearance on the "92 Minutes Of Hair With Mel" show on the Las Vegas, Nevada radio station KOMP 92.3, Tate was asked if he has had any contact with his former bandmates since his exit from QUEENSRŸCHE. He responded (hear audio below): "I just did, actually. It's funny that you should mention that. Two weeks ago [on June 30], I was in Barcelona, Spain and I was playing with a band called AVANTASIA. I did a guest appearance with them, and they were headlining the [Rock Fest Barcelona] festival. And I read on the roster list that QUEENSRŸCHE was opening the festival. So I went out earlier in the day and watched their set. It was the first time I'd seen the band play without me. I'd never heard their new singer [Todd La Torre], but I watched them play and they were great, and that singer is fantastic. He's amazing! He sounds just like me. It was eerie and weird. And then I met all the guys afterwards and shook hands with them, we hugged and said hello, and it was a really nice little reunion, you know, get-together."

Drummer Stet Howland of METAL CHURCH — who also played at Rock Fest Barcelona on June 30 — commented on the Tate-QUEENSRŸCHE mending of the fences on the BLABBERMOUTH.NET Facebook page. He wrote: "Todd happened to be in [METAL CHURCH's] dressing room right after Geoff Tate complimented him. Todd was blown away with Geoff's kind words and sincerity. Shortly after, he (Todd) came up and sang with us and was AWESOME! Spoke with Geoff a bit at our hotel, he was really cool. Both are amazing singers and both were very nice guys when I spoke with them. And rest assured, I'm a shit talker when there's shit to talk. But these guys were both awesome that day. Just sayin'."

La Torre was asked in an interview last month if he could ever envision a scenario where Tate would return to the band either for an album or a tour. Todd said: "For me personally, I respect what those [other] guys [in the band] would ever decide to do.

"I think that this is a forward-thinking band," he continued. "I think that we're in a really good place and we're writing music that… The band has regained that sound that I think was — and I hate to say it, 'cause I love Michael — but was missing for a very long time. We play everything in standard tuning, and I always try to aim high and do the best that I can.

"But me personally speaking, if some crazy thing happened where [Geoff] came back or whatever… I mean, I think we would cross that bridge if we came to it. I don't see it in the foreseeable future, but crazy things have happened, so who knows?"

Todd added: "I have no personal issue — for the record — with him. I don't know him as a person, just as an artist, so I respect what he's done as an artist. And so I'm emotionally detached from him in that sense. I don't really care. I care about what I'm doing with the band."

He went on to say: "I don't have a crystal ball or [a way to predict the future]. I kind of live in the now, and it's one show at a time. So I just don't think that way."

Tate told Metal Wani back in May that the only way he could ever play with his former colleagues in QUEENSRŸCHE again was if "everybody [got] in the same room and actually confront[ed] all the things that were said and all the things that happened. And that is a really big commitment, because there was some really negative stuff that went down. And I don't know if everybody has that kind of want to go through that. [Laughs] The money would be the big driving force that would get everybody together, and I don't need the money, so I'm not really motivated to sit in a room and listen to what I've had to listen to [laughs] with everybody. But, you know, again, never say never." 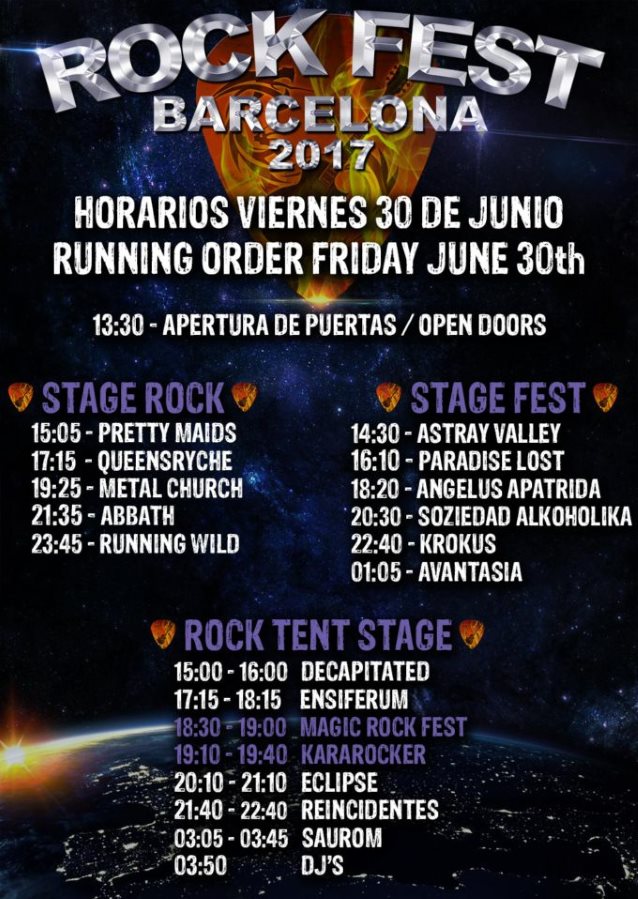