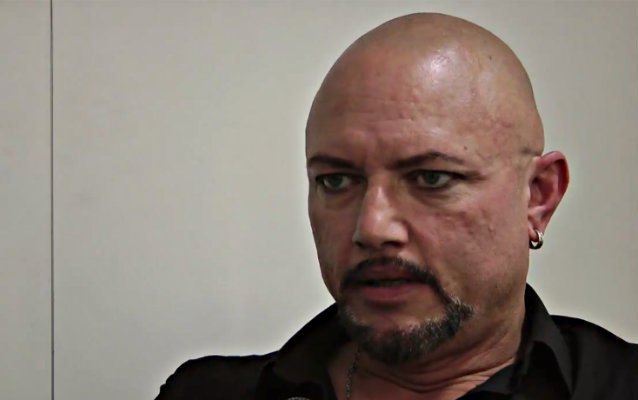 Ex-QUEENSRŸCHE frontman Geoff Tate recently spoke to Lauren Wise of the Phoenix New Times about the settlement agreement with his former bandmates over the rights to the QUEENSRŸCHE name and his decision to carry on as OPERATION: MINDCRIME, named after QUEENSRŸCHE's epic concept album from 1988.

"I am really glad it is settled and that we can all move on," Tate stated about the outcome of the legal battle, which awarded Michael Wilton, Scott Rockenfield and Eddie Jackson the rights to the QUEENSRŸCHE trademark. "The process was difficult for me; it was a long, involved process. But now it's clear sailing.

"I just finished a year-long tour of 25 years of 'Operation: Mindcrime', so future projects after this farewell tour which ends in September, I will be going into the studio to record a new album that I've been working on. I'll be focusing on new music for my future endeavors."

Asked what he is most looking forward to now that he is no longer tied to the QUEENSRŸCHE name, Tate said: "I am looking forward to the freedom, really, of being able to create music without, um, a predetermined moniker. QUEENSRŸCHE is a definitive name, and it's hard for people to get past just the name of it and look at that music with a less judgmental viewpoint, I suppose. So now I will have the freedom to create music how I envision it without the strings attached.

"I've been working on a trilogy project, and it's one of my biggest and most ambitious works to date. I'm telling a story, and I got it down to 37 ideas that needed representing to complete the story. One record wouldn't cover it. I'm hoping to release the first part sometime next spring."

In a recent interview with GoUpstate.com, Tate admitted that he is still perplexed as to why his former bandmates fired him in June 2012, a move which instigated lawsuits over the dismissal and sparked a protracted legal fight over the rights to the QUEENSRŸCHE name.

"I didn't see it coming. I didn't even think it was possible," Tate said. "Why would you fire the main writer? Why would you do that — and the person who is the face of the band and is the identifying key figure in the success of the group? I don't mean that to sound egotistical, because it's not. It's just the truth. Why on earth would you do that? It sounds like career suicide, especially at our ages. We're all in our 50s, for God's sake. Why would you break apart this successful thing at this point in life?"