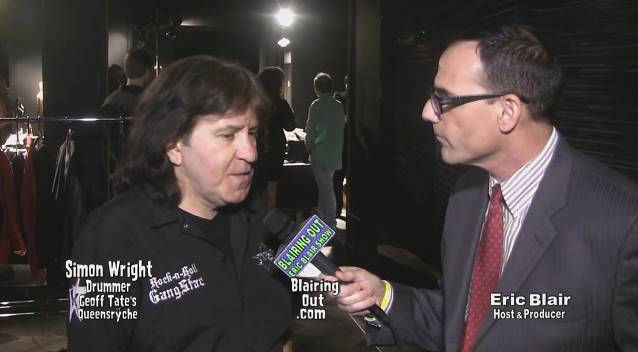 Drummer Simon Wright (DIO, AC/DC, UFO, DIO DISCIPLES, Geoff Tate's QUEENSRŸCHE) was interviewed by Eric Blair of "The Blairing Out With Eric Blair Show" at the March 17 exclusive VIP listening party for the Ronnie James Dio tribute album "This Is Your Life" and awards gala at the Avalon in Hollywood, California. Check out the chat below.

He added: "You know, it's funny… Ronnie came up… We were having a conversation about something and something, and Ronnie's name came up, and I was talking to the keyboard player [Randy Gane]. And I notice some things in Geoff that Ronnie has as well, and vice versa. [Geoff] is a very genuine, down-to-earth person. He loves to sing, loves to be creative and stuff like that.

"There's a whole big [legal] mess going on at the moment [with Geoff and his former bandmates in settlement discussions over the rights to the QUEENSRŸCHE name], but that's what Geoff is to us — very creative, a very down-to-earth human being. It's great being on the road with him. [The fan reaction] is so good. A lot of the shows are sold out, there's big crowds and everybody's getting in the vibe."

King County Superior Court Judge Beth Andrus signed a new order continuing trial date, allowing the parties four more weeks to come to an agreement over the use of the QUEENSRŸCHE name and its associated trademarks.