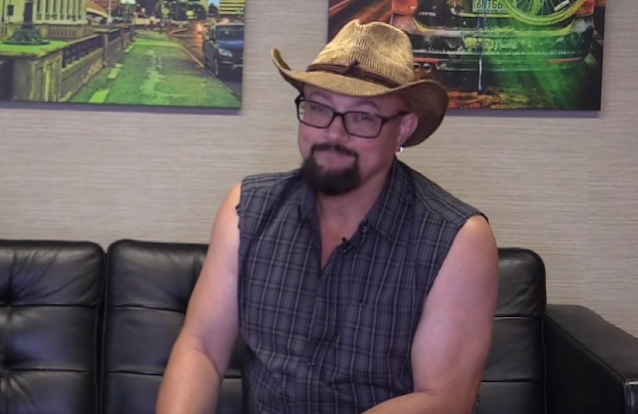 In a brand new interview with "In The Vault With Shanda Golden", former QUEENSRŸCHE singer Geoff Tate spoke about the importance of collaborating with as many different musicians as possible.

"When I was in QUEENSRŸCHE, I spent 30 years playing music and associating with and focusing on the same group of people," he said (see video below). "So when that was over, I thought to myself, 'What do I wanna do?' And what really interested me is having as many experiences as possible and playing music with a number of different people. So I've had a number of different people playing with me in my bands — I think I'm at 16 or 18 different players right now — and [I'm] just loving it. I've been playing with some legends and I've been playing with some new people that are just starting out that have all this enthusiasm and emotion. I love it all. It's great."

The "Mindcrime" set covers all 15 songs from the album including such fan favorites as "Revolution Calling", "Operation: Mindcrime", "I Don't Believe In Love" and the closing track, "Eyes Of A Stranger". As fans might remember, Geoff performed the album in its entirety on tour in 2013 to celebrate its 25th anniversary.

Tate's band currently on tour features Kieran Robertson from Scotland on guitar, Bruno Sa from Brazil on keyboards, Jack Ross from Scotland on bass, Scott Moughton from Canada on guitar, Josh Watts from England on drums and Geoff Tate's daughter Emily, who is singing the parts of Sister Mary. She's also in the band TIL DEATH DO US PART, who are special guests on this tour.