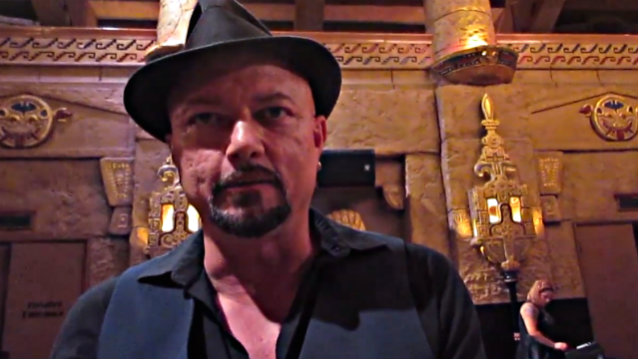 On August 20, Jay Nanda of the San Antonio Metal Music Examiner conducted an interview with former QUEENSRŸCHE singer Geoff Tate. You can now watch the chat below. A couple of excerps follow (transcribed by BLABBERMOUTH.NET).

On his upcoming trilogy project:

Tate: "I've been working on it for a couple of years now, and it's pretty far along, very developed. There's a story line that spreads out over three records; thus, we have a trilogy. And it's a very in-depth story, kind of like a mystery, in a sense. The story takes place internationally, in a lot of different locations around the world, and the music kind of reflects a little bit of some of the original music from those areas where the story takes place. We have nuances of European music in some of the songs, we have nuances of Asian music in some of the songs. And I think it's very cool; it kind of sets the tone of where the story takes place. It's very, very much a progressive album; there's lots of notes [laughs] and lots of interesting time-signature changes. From a muso standpoint, it's gonna be the most interesting thing I've ever done. There's a lot of no holds barred, a lot of non-conforming to the past. Since the past is over, we're all kind of looking forward to the now and what we're doing next. So we've kind of thrown off a lot of the things that go along with the past, like song structure and themes and things like that. We're taking this in a very different way."

On whether he would describe his upcoming trilogy project as "Operation: Mindcrime" "on steroids":

Tate: "Well, I always hate to compare what I've done with what I'm doing now… It's very in-depth, and like 'Mindcrime', there's a lot of thought that goes into it. You have an outline and you have to write the story around the outline, and then you have to get very in-depth with the lyrics, of course, and then make sure that the melodies match up with the sentiment of what the lyrics are about. Then you've got the song structure itself — how do you present this idea the best way you can? There's a lot of thought that goes into it. Then you've gotta tie it all together so that it follows some sort of linear path and it doesn't lose your audience along the way. And you have to make it interesting, something that people will want to listen to over and over again rather than just putting it on once and going, 'Oh, I've got that.' I try to stay away from that kind of thing."

On whether he is happy with the settlement agreement that awarded his former bandmates Michael Wilton, Scott Rockenfield and Eddie Jackson the rights to the QUEENSRŸCHE trademark:

Tate: "I'm very happy. I'm extremely financially happy right now. [Laughs] They had to pay me, which is what they should have done all along; that's exactly what the whole court case was about. So they finally agreed to pay me for my share of the name and the business. So here I am. I'm continuing on doing what I do and they can continue doing what they do, and we'll all be happier.

"A lot of people are saying now that the other guys 'won' the name. Well, they didn't win it. We never went to court. It was all an agreement on a settlement out of court. It was a financial arrangement. So it wasn't like a 'win-lose' thing. In my opinion, I think I won. [Laughs]"