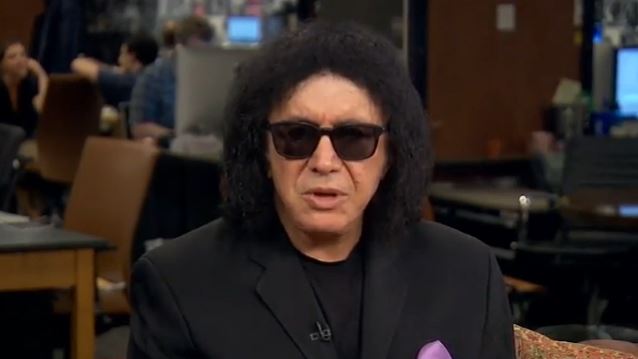 KISS bassist/vocalist Gene Simmons stopped by HuffPost Live on Monday (August 11) to chat about the band's new tour and the reality series "4th And Loud", which documents the KISS-branded Arena Football League team LA Kiss. The conversation quickly turned to Simmons opining about immigrants today and their reluctance, in his mind, to learn English.

Asked how he feels about the fact that KISS' music has connected with multiple generations, Simmons replied: "In all seriousness, it is a tug of the heart. I am sincerely…. How should I say, 'cause I get all choked up…? I wasn't born in America. I know I don't look Swiss. And when I came here as an eight-and-a-half-year-old boy with my mother, I was welcomed by America and its people and given all the advantages of native-born children. Which is astonishing, when you think about it, because in other countries, they would have ground me up and put me in a can of dog food. And in America I could think what I wanted to think, do as I pleased and reach for the stars.

"In America, I've learned — since I've got a new book coming out shortly called 'Me, Inc.'; HarperCollins is bringing it out — you have an inferred fiduciary duty to learn how to speak English. Get rid of your accent; I did. Be a legal immigrant; I'm a legal immigrant. Come to the country, just buckle your knees a little bit, make the effort to learn the culture, assimilate to the point that you can. You're all proud of who you are, where you come from… Great. Whatever you're proud of, just tip your hat to America, which is the melting pot and makes it all possible. Agree to one culture that we can all communicate with and then go off and speak Swahili and Fārsi and whatever you wanna talk."

Pressed by host Ricky Camilleri about the seemingly aggressive tone of his message, Simmons said: "I'm actually saying the thing that needs to be said, 'cause the politically correct climate is bullshit. [The politically correct climate dictates that] you don't want to upset anybody by saying, 'Learn to speak goddamn English.' So, as an immigrant, I'm telling you: learn to speak goddamn English. It is the key that will unlock the keys to the kingdom. If you make the effort, then all the possibilities of this culture will open up for you and give you all the rewards that I've gotten. I mean, I wasn't born here and America has enabled me to be a team owner in LA Kiss, to have reality shows and to be in a rock band and to have licensing and merchandising [deals], and a restaurant chain. We're financing films now. You can't imagine the width and the breadth of it all.

"Because dress British, think Yiddish. If you make the effort… When in Rome, do as the Romans. The rewards are multiple times more."

When Camilleri argued that it may be difficult for some immigrants to learn to speak English correctly because they move to America when they are in their 40s or 50s, Simmons said: "Of course it's difficult, but why should it be easy? Why should it?

"Then work at menial labor the way my mother did, who still speaks with a very thick [accent] to make it possible for the next generation to go to proper schools and learn the culture and the language.

"I speak five languages. Learn to speak a language correctly. It's not easy. By the way, you don't have to.

"How about this: If [Apple's voice-driven personal assistant] Siri can't understand you, you're in trouble."

He continued: "The more you learn to speak English and the more you know about American history, the more of an advantage you'll have in this culture. There's no other way. 'Well, I don't wanna learn about that. I'm proud only of Israeli culture and I only wanna speak Hebrew.' You're allowed to do that, but you won't get the keys to the kingdom. That's life.

"It's important to say that, because nobody has the balls to do it. So as somebody who wasn't born here, I can damn well say all that and feel righteous about it, because nobody tells immigrants who come to America, 'Look, do yourselves a favor. Stop watching predominantly your native culture's television. More than not, learn to speak English and learn the people skills.'"

You can watch the entire interview at HuffPost Live.