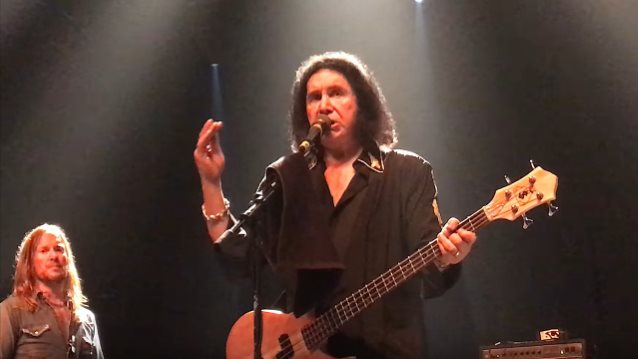 "It's a very sad day today," Simmons said prior to launching into the song (see video below, courtesy of Rob Lovash). "One of the founding fathers of rock and roll has passed on. If it wasn't for Chuck Berry, there wouldn't have been rock and roll."

The rest of Simmons's set in Cleveland included two songs from his 1978 solo album, as well as a number of '70s- and '80s-era KISS classics, including "War Machine", "I Love It Loud", "Parasite", "Almost Human", "Got Love For Sale" and "Charisma".

Last night's show was one of five performances Simmons is staging in conjunction with his Wizard World Comic Con appearances. He will also perform at conventions in St. Louis (April 8-9), Philadelphia (June 2-3), Chicago (August 26-27) and Austin (November 17-18).

"This is gonna be a first for me," Simmons told CantonRep.com about playing his own shows. "Outside of KISS, I've never done a solo tour. I never did anything like that. Every once in a while I'll jump up on stage and do a song with somebody. Johnny Depp and I did a few songs together, a few other knuckleheads, but that's about it. When Wizard World and I agreed to do five events together, the idea of jumping up onstage and gulping it on for an hour or so came up. And I got a great bunch of guys, real rocking guys who are gonna get up with me, and we'll play all the hits and have ourselves a good old time."

Simmons said in an interview earlier in the month that he was still working on his box set that will include "150 songs that have never been released. That news is gonna be released soon."

Berry, a music pioneer often called "the Father of Rock 'n' Roll," died Saturday at his home outside St. Louis. He was 90 years old. Berry's death was confirmed by the St. Charles County Police Department in Missouri.