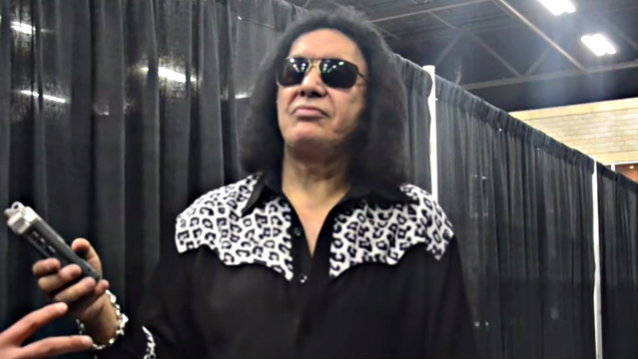 Gene Simmons has once again ruled out the possibility of KISS reuniting with original guitarist Ace Frehley.

More recently, Ace collaborated with Gene on two songs for the former KISS guitarist's next solo album. And then last week the Space Ace and and the Demon shared a stage for the first time in sixteen years at a benefit concert in St. Paul, Minnesota.

Asked directly about the chances of Frehley's return to KISS, Simmons told "The Cassius Morris Show" (see video below): "That's not gonna happen. Ace has been in and out of the band three different times. That's enough."

Gene's comments echo those made by Stanley, who told Billboard earlier this year that he had no interest in a reunion of KISS's original lineup. "That's not coming from any place of animosity," he explained. "I sang on Ace's most recent album and did a video with him. I have the connection and the reconnection and to celebrate the good things we've done together is terrific. The band as it is — I've played with [current KISS drummer] Eric Singer for, I think, twenty-five years and Tommy's [Thayer, guitar] been in the band probably fifteen years at this point. I have no thoughts of revisiting the past. With that said, I am happy to enhance or do whatever I can for anyone who has helped put me where I am, but that doesn't include getting hitched again to somebody I unhitched from."

Frehley said a few months ago that he hadn't been contacted about re-teaming with KISS for one last run of shows before the band calls it quits. But, he added, "I'm not ruling it out. It's a possibility, I guess. But the ball's in Paul and Gene's court. If that's something that they would like to do to end off the career of KISS, I think it could be… if it was handled correctly, it could be great. But those guys pretty much run the show these days. And I'm doing my thing, and they're doing their thing. And if it happens, it'd be great, and if it doesn't, I'll be fine and they'll be fine."