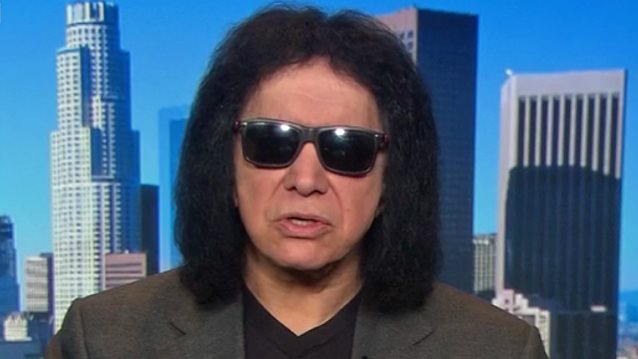 KISS bassist/vocalist Gene Simmons has paid tribute to David Bowie, who died on Sunday, two days after his 69th birthday. Simmons told CNN (see video below): "In 1975, in New York City, both David and KISS were in the same recording studio. And we had yet to, sort of, ascend and play the stadiums and all that. We were still a new band. Some people knew about us, some not. David Bowie, I don't know why, made it a point of inviting us into his recording session. And we were all nervous and stuff. And I remember walking in, and even though we didn't know each other, he smiled and looked me right in the eye and stuck his hand out and said, 'Hello. Wonderful to meet you.' And I was taken back, I was awestruck by, you know, a giant — this guy who changed the face of music, refused to stand still and look over his shoulder while he was running his own race. You know, he just continued to move as fast as he could forward, marching to the beat of his own drums."

He added: "'The Rise And Fall Of Ziggy Stardust And The Spiders From Mars', especially, that record, is deeply ingrained in my DNA. And I think, you know what? He passed three days after his birthday, at 69, and he just released a brand new record called 'Blackstar', and I think it's worth noting that the first lyric in the first song says, 'Look up here. I'm in heaven.' I mean, what a giant."

Asked what it is about David Bowie's costumes and onstage personas that added or complemented his music, Simmons said: "Bowie, it seems to me, always understood that when people go to concerts, they're not just listening to music, they're listening with their eyes, and that you've got to give more. And heaven knows, Bowie gave his fans and everybody else much more. I think it's worth noting that, unlike us, and unlike all the rest of the famous people out there, he refused to stand still — which is why it's astonishing… When you look through the decades and through the years, you can never pinpoint who David Bowie was, because he was so many things. His musical homage… Even in that line 'Wham Bam Thank You Ma'am!' in a song called 'Suffragette City' is an ode to Charles Mingus, the great jazz artist, and his drummer, Max Roach, who used to say, 'Wham Bam Thank You Ma'am!' I mean, this guy was… You just can't define exactly what he was. He was unique. And it's worth noting that there are a lot of famous rap stars and pop stars and all that stuff… It ain't the same thing. The word 'icon' is reserved. The air up there is thin, and there are very few up there who deserve to be up there, and clearly David Bowie does."

Gene also talked about how he felt when he first found out that Bowie had died. He said: "[It was a] very, very sad day, but like Bowie always has been throughout his life, he just didn't use his private life as another headline for CNN or anybody else. He understood that he was… I'm assuming he understood that he wasn't well and decided not to drag the media into it and quietly and humbly — and, yeah, royally — went his own way. You know, he was a giant."

According to reports from insiders in the David Bowie camp, the music legend died from liver cancer, after suffering from a handful heart attacks in recent years.