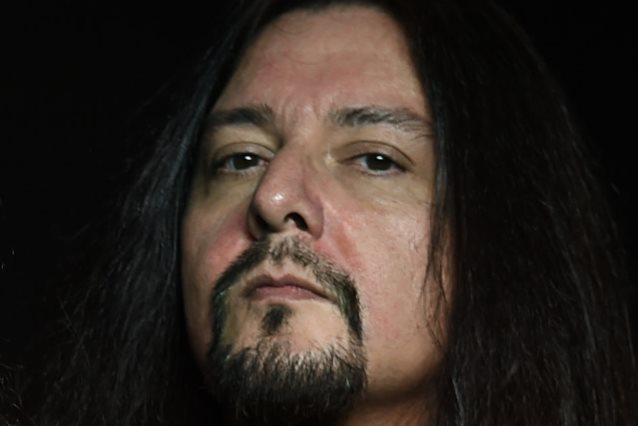 Hoglan, who has previously described himself as a "nerdy RUSH fan," was asked what he learned from listening to the Canadian rock trio that he was able to apply to his own music. He responded: "One thing for me, and I realize, as I've grown up, I've met other musicians that maybe they're not the biggest RUSH fan because they were into the things that RUSH were influenced by. But for me, RUSH, there were just no rules.

"I got into RUSH before there was a whole lot of radio play on 'em, and I realized that their 'Moving Pictures' record seemed to really catapult them into a lot of radio play and they had a little bit of radio with 'The Spirit Of Radio' from 'Permanent Waves', the album that preceded that. But I was into '2112' and 'Farewell To Kings' and 'Hemispheres' and all that. A lot of those songs weren't designed for the radio; therefore, there was no radio play on it. And when you design something that's not gonna be played on the radio, I think that gives you a real carte blanche to just let your freak flag fly — let there be no rules.

He continued: [RUSH drummer] Neil Peart came up with so many great drum parts that were so memorable yet they were understandable from a drum standpoint. You'd have guys like Terry Bozzio playing with UK or Frank Zappa, where a lot of his drum parts were amazing too and they were so amazing that it would just get you kind of depressed. It was, like, 'Ah, I could never figure that out.' But Neil Peart was a guy that, it's, like, this is pushing the realms, this isn't just plain old rock drumming, but it's understandable. I could grasp every single thing that Neil Peart was doing."

Hoglan added: "Remember, [I was] like eight, nine, ten, eleven when [I was] super getting into RUSH. And their lyrics really appealed to me — it's, like, 'Wow, they aren't just singing about partying or getting chicks on the weekend. There's something of merit, there's some heady stuff happening with their lyrics.' So I guess that was just… My big influence was just their whole approach. And then, shortly after being a RUSH fan, that's when I started getting really into all the super-duper heavy metal stuff like that. So it was just a natural progression for me."

It took a long time for it to happen, but DARK ANGEL finally reunited in 2014, playing a successful tour of Europe with the full "Leave Scars" lineup, including Hoglan.

The band is currently working on new material while continuing to play sporadic shows.