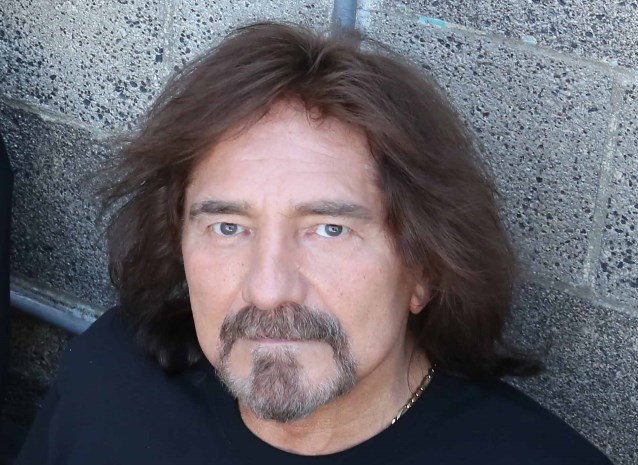 Asked if he still feels up to his powers as a musician, Butler said: "I've always said as long as I can play, as long as I can do it to a good level, then I'll keep doing it because I still really enjoy playing. I'll know when the day comes I can't do this anymore, can't play to my usual standards. That's when I won't go out anymore. I won't do that to me self. But at the moment, I just love playing with the band. It probably will be the last time, will probably be the last tour. But I want to go out on a high. The band is playing really well at the moment."

When pressed to elaborate on why he thinks this will be the last BLACK SABBATH tour, Butler said: "I don't know. I just got a feeling. It's getting tough, it really is. I can't lie about that. I'm old now. It really is tough going on every night. You wake up next day, all the pains you never had before. I don't want to go onstage for the sake of the money. You have to have a lot pride in yourself, and I honestly think I'm coming to the end of the top of my job."

BLACK SABBATH guitarist Tony Iommi said he'd love to make another record with the band — but admitted that it all depends on how his health holds up. Iommi, who was diagnosed with cancer in January 2012 and continues to undergo treatment for the disease, told CT.com, "It's a question that's been asked a few times. I don't really have an answer. Because of my treatments and stuff I can't commit to doing another two years or anything like that. I have to play it as it comes now."

Iommi added, "I'm really enjoying it. If the rest of the year goes well, then we'll look at it and see if it's possible to do another album. It would be very nice to. You can't beat that feeling of walking onstage, especially with your old mates, you know. I think it's better than it was 40 years ago."

The reunion was marred by Iommi's illness and founding drummer Bill Ward's refusal to participate over a contract dispute.

With RAGE AGAINST THE MACHINE's Brad Wilk sitting in on drums, the band and producer Rick Rubin ended crafting "13", which came out in June and became the group's first-ever No. 1 album in the U.S.

When The Pulse Of Radio asked Ozzy recently about the possibility of doing a follow-up to "13", he replied, "If we do do another album, it'd be great, but if we don't, this will be a nice way to round it up. The only sad thing is that Bill never played on it."