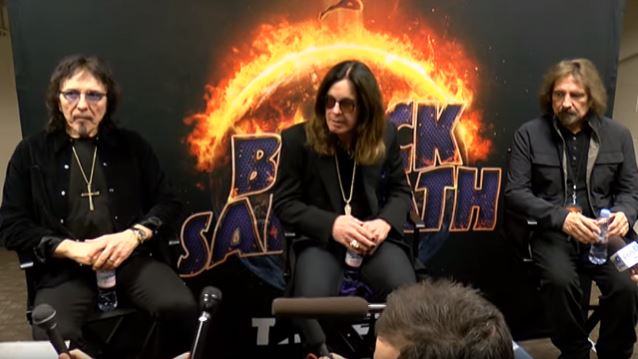 BLACK SABBATH bassist Geezer Butler says that the band's original drummer, Bill Ward, was offered an opportunity to join the group at the final concert of its farewell tour, but that Ward declined, because "he wants to do the whole tour or nothing."

Ward has insisted in recent interviews that he was quite capable of playing a full concert with SABBATH, despite the bandmembers themselves saying the opposite. Ward stepped away from the SABBATH reunion in early 2012, while the group hinted that he was not in good enough physical shape to either record or tour.

Asked if there is a possibility that Ward could join them for a few songs at their final U.S. concert on September 16 in Phoenix, Butler told Radio.com: "It's been mentioned to him. But he doesn't want to do it. He wants to do the whole tour or nothing. We'd love him to come on at the very last gig and be part of the whole thing, but he didn't want to do that. And I understand: I wouldn't want to be asked to come out just for the last gig. It's a shame, but that's the way it is."

Added SABBATH singer Ozzy Osbourne: "If he's there, he's welcome [to play]. But I don't really want to talk too much about Bill Ward. Because every time I do, he starts getting pissed off at me! Things are quiet between us right now, you know?"

Continued Butler: "It's a shame that Bill won't be a part of it, but whatever happened, happened. It's great that at least the three of us can end it on a high note and be friends together."

He went on to say: "I still get on with Bill, I saw him last year at some award show. We got on great, we had a laugh together. It's not personal, as Bill would say, it's business."

Butler told Classic Rock Revisited earlier in the month about why SABBATH was unable to come to terms with Ward in order for the drummer to participate in the group's farewell tour: "It's beyond the money thing. It is not really anything to do with that. It is whether he's capable of touring or not. On the '13' tour, he was not on that tour. About a week after we started, he had to go into the hospital for major surgery. We would have had to cancel the tour if Bill was still with us. He hasn't been well for a long time. He's had a couple of heart attacks."

Butler continued: "You have to face facts, when you get to our age and you're not in great, great health, whether you can go out on the road for two years, or whatever. It is a hard life to do. The easy part is when you're on stage playing. It is all of the traveling and everything else that comes with it that is the hard part."

Ward has insisted that his health is good and that he has been capable of performing, but was not offered a "signable" contract by SABBATH.

Osbourne's solo drummer, Tommy Clufetos, is again handling the drums on the farewell tour, which kicked off on January 20 in Omaha, Nebraska. Clufetos also played on the "13" tour, although Brad Wilk was behind the kit for the CD.

The band is making an EP featuring four songs left over from the "13" sessions available at the shows.

Although SABBATH will not tour again after this run, Butler, Ozzy and guitarist Tony Iommi have not ruled out recording together again.