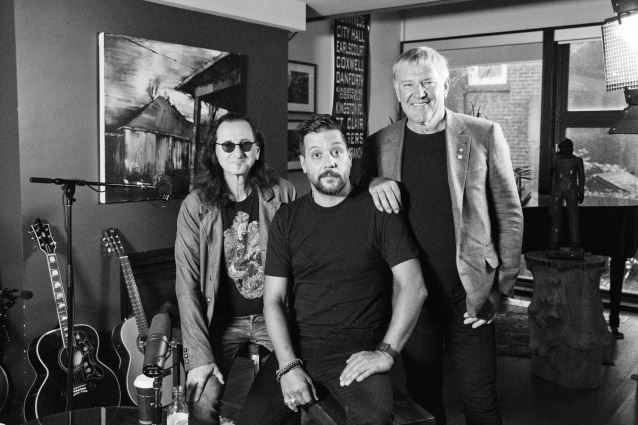 On the latest edition of "The Strombo Show", Geddy Lee and Alex Lifeson of RUSH spoke to host George Stroumboulopoulos about the fortieth anniversary and the deluxe reissue of their seminal record, "2112", and various other topics. You can now listen to the chat at Strombo.com. A few excerpts follow below.

On being presented with a key to the city by Toronto mayor John Tory and having a park in Willowdale named after them:

Geddy: "It's weird to think of a music career with these kind of accolades. You don't really naturally associate a rock and roll life with somebody naming a park after you, but obviously it is very complimentary... It's bigger than you can actually imagine. I'm honored and I'm sure Al is and I know my mom is very excited."

Alex: "It's close to Earl Haig High School, where Geddy and I had played — I don't know how many times in the early days and we used to hang around in that area when we were growing up, going to the Red Barn for fries and burgers. It's all there in our past, so it is kind of cool."

Geddy: "You can't avoid your past, when you've been in a band for this long... You're forced to live in your past a lot of the time. It is therapeutic in some way to have a perspective on your past without being obsessed by it."

Geddy on taking care of his voice:

Geddy: "I live in a total state of paranoia when I'm on the road because of my voice and because I have to sing those notes. It's work and you have to put yourself in the state of life on the road that enables you to perform that kind of material... If I listen to some of the early live recordings, you can hear that I'm really shouting more than singing those high notes, and if I listen to my version of them now, I'm trying to sing them more. That's part of youth. Your body will do what you force it to do when you're young. When you're older trying to do the same thing, you have to be methodical about it.

"When we were putting 'R40' together, we were going back in time to our earliest period and there were a couple of songs that I didn't think I could sing anymore, and Alex kept saying, 'Yeah, you can do it.' He just ignored me, all my bitching and I bitch quite often."

On the bittersweet feel of the final tour:

Alex: "Anything you do for the last time has a sense of longing and a bit of sadness, I think. And after doing this, for Geddy and myself, for 46 years, for 47 years, it did seem a little… you took in every second of every show and made sure you scanned the whole crowd and put it in your memory banks."

Geddy: "And there's also a bit of denial that gets you through it. You go, 'Ah, this won't be the last one. We'll take a break and then we'll get back together and we'll do another one... 'cause you don't want it to end."

On whether he still thinks that RUSH will tour again:

Geddy: "Not really. I think I've accepted that it's probably the last one as a tour. So we'll see!"

On whether they occasionally send e-mails to drummer Neil Peart saying, 'Hey, we can do this one-off":

Geddy: "Yeah. we send all those things, but the responses are not as enthusiastic. [Laughs] We talk."

Alex: "It's okay. You know, it is what it is. I've been playing a lot lately and I've been doing some writing, just to keep my fingers in it, and I'm finding it's really satisfying. I'm doing some charity gigs with other guys, old guys like me who don't have gigs anymore who get together, and it's a very positive, productive thing that you're doing, and it's fun to get together and play, whenever you get a chance to play. So it's not like it's over, you know."

On whether they can see the places where they want to play that aren't necessarily RUSH:

Geddy: "I think we all have ideas about things we could do [outside RUSH]. I think the tour was kind of emotional, and I think we… at least my attitude is that I needed a good clearing of my mind before knowing where my heart wants to go next as an artist. And I think that's a natural process and one that shouldnt be forced. So I think that's sort of where we are at right now."

Alex: "I think when we write together, that's a real special thing. We haven't, but we'll see."

Geddy: "I was really surprised so many musicians sort of kicked in to happily do a version of one of those songs... [FOO FIGHTERS] are like the sweetest guys ever. Steve Wilson… [It's] surprising to me that these guys wanted to participate in the way that they did and they did really interesting version of the songs. It is really cool... When you think of your own music, especially RUSH music, I don't think of it in terms of other people playing it because it is so connected, it is such weird stuff... They're not easy songs to cover, you know? They're idiosyncratic, so I'm always surprised to hear what someone does with it. I don't know. Maybe it is that you always associate your music with yourself, especially the kind of music that we do."

On the Rock And Roll Hall Of Fame induction:

Geddy: "That was a surprisingly emotional day... I think we spent so long denying it, denying its importance that when the moment arrived, it took us by surprise and here we are in this room and the room was full of RUSH fans. It just seemed much bigger in the moment than we expected. It was a great night. It was a great event in the end and I think we are happy about it."

Alex: "The moment on stage was great... I didn't know I was going to do [the 'blah blah' speech] until I walked up the steps. I had a speech in my pocket and I thought, 'Okay, maybe I'll try this.'"

Geddy: "Your speech came up on the teleprompter and he wasn't saying it."

Alex: "But just like Donald Trump, I didn't follow the teleprompter... I just wanted to tell the story of who we were and how we got here and that whole thing in a hopefully a humorous way to cap it off. I mean, it is the Rock And Roll Hall Of Fame, it is supposed to be kind of fun and irreverent."

Geddy: "And it was a long night of some very long speeches that were very self-indulgent, and sol I think, to a lot of the performers and people that were sitting in the room. I think they found a sense of relief. Al was just mucking it up. A couple of the speeches were like, 'Wow, they just told your life story. Why are you telling it again?' It was a bit weird."

Geddy: "We've come to appreciate a handful of musicians over the years that are in very different kind of bands. I guess if I could relate to anyone in that sense, probably PEARL JAM, because they're so normal. They're such nice people, and they just take that same attitude that we are just going to do what we are going to do and people appreciate their honesty and their authenticity, you know? ... There's a kind of kinship there. We're not pals, in that sense. Just like with Dave [Grohl] and Taylor [Hawkins of FOO FIGHTERS], those two guys. I think we feel a sort of brotherhood there, even though we are not pals. We don't live in the same town, we don't hang out together."

Geddy: "Dave's mom and my mom are pals! They are pals, which is really weird. Dave's mom has written a book about rock moms and she came up here to interview my mom and they hit it off like a house on fire, so when she heard that the FOO FIGHTERS were playing up here, she said, 'I'm coming!' She called my mom and sent a car for her and my sister and took her to the show. Dave sat them right on the stage and they punted out through the whole show and they kept putting them on the screen, punting out at the stage, and, of course, when they broke into 'Tom Sawyer', my mom was just beaming! 'I know this one!'"