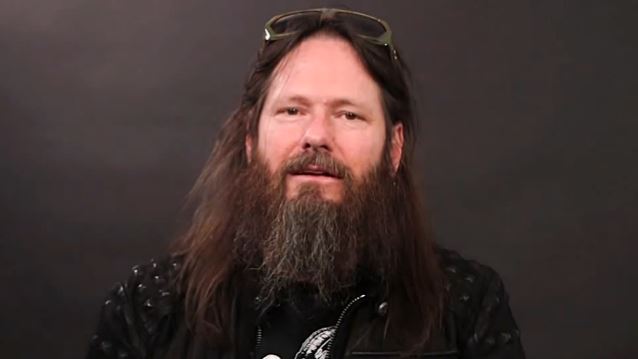 To celebrate late SLAYER guitarist Jeff Hanneman's life on the second anniversary of his death, Loudwire sat down with current SLAYER guitarist Gary Holt (also of EXODUS) and invited him to share his memories of Hanneman. You can watch the clip below.

On when he first heard SLAYER:

Gary: "The first time I heard 'em, that was probably when [SLAYER's debut album] 'Show No Mercy' was recorded. I don't think I'd ever heard even any demos or anything prior to that. But we heard it, and myself and [late EXODUS singer] Paul Baloff, we loved it. It's, like, 'SLAYER! These guys are from L.A.? You've gotta be kidding me.' It's, like, the land of big hair and everything. But… you know, it was right up our wheelhouse, musically. And then we met. They played the Keystone [in] Berkeley by themselves and then played with us at the infamous Ruthie's Inn the next day. And after the Keystone show, we destroyed their hotel room — with ther permission, of course. But it was a level of carnage that had to be admired; it was pretty epic. And then the cops were coming, and we scattered like cockroaches. But we told [the SLAYER guys] they couldn't wear the eyeliner at Ruthie's; it wouldn't go over well with the hardcore people that came to all our shows there, and they never wore it again. And we've been friends ever since. 'Cause we were just kids, and we were just playing the music we loved, the kind of music we wanted to hear. So we wrote it ourselves. Like the [1985] VENOM tour [which featured EXODUS and SLAYER], we were touring with our heroes, so every day was like Christmas. I've got photos of us at soundcheck, a tall can of Coors Light in the hand, drinking at, like, two in the afternoon on a gig day. [Laughs] It's pretty funny."

On how he found out about Hanneman's passing:

Gary: "I found out through… Someone texted me — I don't even remember who — and I called Kerry [King, SLAYER guitarist] to confirm it, and he told me it was true, unfortunately. Everybody was trying to come to grips and comprehend it. When something like that happens, it's quite hard to believe that it's actually true. You don't want it to be, so your mind's wrestling with so many emotions. So, for Kerry and Tom [Araya, bass/vocals] and Dave [Lombardo, drums], who started the band with him, it's like a blow to the head with a sledgehammer. It's a lot to deal with."

Gary: "He did things his own way; from the riffs to the solos, they were uniquely him. Some people say I should play Jeff's solos the way Jeff did, but I don't think that's doing him justice, trying to copy him. I'll keep signature little melodies and stuff, especially in the early songs. But I always say, if you wanted someone to play 'em exactly like that, there's a million guys in SLAYER tribute bands who'd do a better job than I am. We play different. He just had his own style, because it wasn't textbook. It was very off the cuff and he did [things] the way he wanted to do it, where I learned things through scale and structure."

On Hanneman being an EXODUS fan:

Gary: "I remember [EXODUS] did a show several years ago at Hellfest in France and Jeff actually came up to watch EXODUS's set, and everybody was stunned, because Jeff doesn't leave the bus to watch anybody play. [Laughs] So I take that as the highest compliment and quite an honor that he got out of the bus to come watch us."