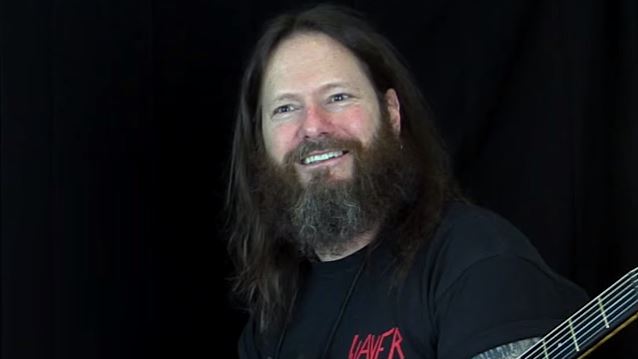 Billy lends his signature roar to the track "BTK", one of the first songs recorded by returning vocalist Steve "Zetro" Souza.

Original EXODUS guitarist Kirk Hammett, who has been a member of METALLICA for the past 31 years, contributed a solo to "Salt The Wound", which can be streamed in the YouTube clip below.

Asked what makes the camaraderie between EXODUS, TESTAMENT and METALLICA still so strong after so many years, Gary said: "I just think, as we all are well into middle age, at the half century mark myself, and probably all of us, just about, you start remembering what a wonderful time it was back when we all started. I mean, back in the days, there was a lot of competition — friendly competition, but competition nonetheless. But now, we look back and we really were part of something special."

Regarding how Chuck's appearance on "Blood In Blood Out" came about, Holt told Full Metal Jackie: "Chuck just happened to show up in the studio [while we were recording] and I made him get in front of the mic. [Laughs] Like, 'Chuck, I've got a spot for you here. Go, get in there. And he goes out and just roars, blows walls down. It's awesome."

He added: "He showed up and I kind of already had a little thought in my head about how it'd be great if Chuck just doubled the scream section at the end.

"He's got this voice, it sounds amplified when it's coming out of his chest. It sounds like he's already singing through a PA. It's really mindboggling how much power he's got."

As for Hammett, Holt said: "Kirk, he wanted to do this solo [guest appearance] more than anybody, 'cause I think for him it is like coming home, going full circle finally playing on an EXODUS album with the guys he started playing with at 16 years old.

"I think the seed was planted through… I've spent a lot of time with Kirk over the last four years and we really reconnected. And we spent a lot of time just making people pee their pants, listening to Kirk and I speak of all these criminal stories of us as kids. It’s really ridiculous. When you're referring to the lead guitar player for the world's biggest rock-metal band of all time and just the kind of shit that we did as kids, it's ridiculous. So it went from there and it grew and grew to, like, 'Dude, you should do a solo.' And he was so stoked to do it. He wanted to do it worse than anybody. It was awesome."

Hammett told RollingStone.com about the session: "It felt really casual, really cool — just like it did back in 1980 when we were all just hanging out back in the day. Me, recording a solo on their album was a huge thing for me. Other than the EXODUS demo that's been heard by a lot of people, it's the only time I ever recorded with EXODUS. It was a huge thing for me."