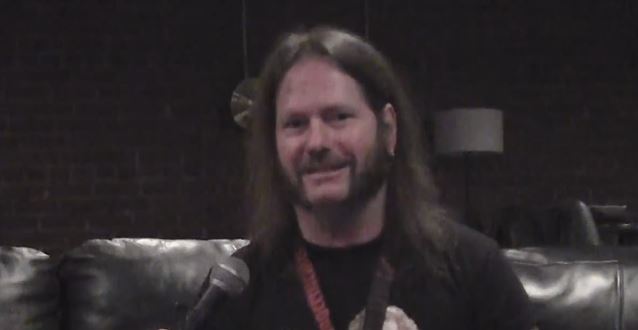 FM99 rock girl Kimi conducted an interview with SLAYER and EXODUS guitarist Gary Holt before SLAYER's October 3 concert at the NorVa in Norfolk, Virginia. You can now watch the chat below. A couple of excerpts follow (transcribed by BLABBERMOUTH.NET).

On how he juggles being in two bands, SLAYER and EXODUS:

Gary: "It's not easy, and most of the time I don't. Kragen Lum, the guitar player from HEATHEN, he's filled in for me for a long time when I can't be there, and he's filled in quite admirably; he does a great job. It sucks that I can't be there all the time — I can't be there most of the time, it seems — but between SLAYER's schedule and trying to maintain some semblance of a home life with my wife and my children, my only other option is to stay on tour twelve months out of the year, which I can't do; I'd break down and fall apart physically anyway. So, after this tour [with ANTHRAX and DEATH ANGEL] is done, I'm gonna go full-board and work on the next EXODUS record. We've got a chunk of time off after and try to get it done and ready to go in the time that I have off so that when the time is right, in 2017 at some point, we'll drop a new EXODUS and I'll be able to hit the road for it. So I'm looking forward to it."

On what it's been like since he joined SLAYER:

Gary: "It started as just a short-term thing to help out some old friends. Unfortunately, tragedy struck in the middle of all of it. It was gonna be, like, a two-month endeavor. It's taken some time off from EXODUS at the time that Kerry [King, SLAYER guitarist] called me up and asked if I'd help out, and I said, 'Sure.' It sounded fun, stepping outside my own little EXODUS box for a little while. And, unfortunately, here I am still, and I say 'unfortunately,' because if tragedy hadn't struck with Jeff [Hanneman, late SLAYER guitarist], Jeff would be here in his rightful place, in his own band, and I'd be in my band where I've always been happy and comfortable in my skin anyway there. But this band is like a second family to me, and I guess I'm fortunate that I have two bands that are like bands of brothers. So it's pretty awesome in its own ways, but, like I said, tragedy is what's led me to be here almost six years."