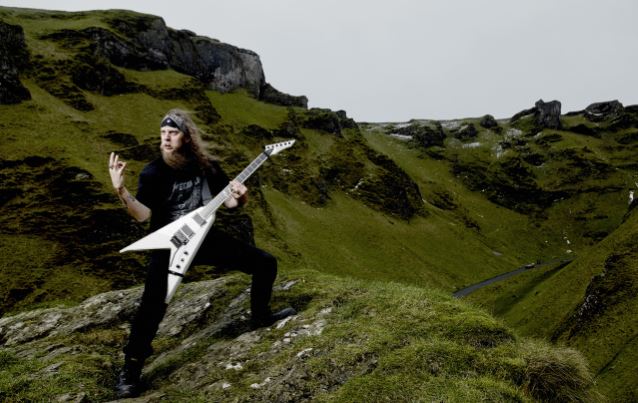 Former EVILE lead guitarist Ol Drake has released the first single from his upcoming debut solo album, "Old Rake", which features instrumental guitar encompassing a myriad of styles, including flat-out shredding, classical, progressive, melodic and acoustic. The CD will be released on June 22 in Europe and June 23 in the USA.

Listen to "Guitarists Playing Guitars" now on Spotify at this location.

Ol Drake comments: "Behold the first single from the already-rusty 'Old Rake'. This song was written by trying to write the cheesiest riff possible and going from there.

"I was speaking to Gary Holt and he said he'd like to solo on the album, and it just happened that when he'd said that I'd reached the main 'solo section' in its writing process. Then I thought, 'I might as well go all out.' James got involved and I couldn't believe it; to have two of my idols from growing up on one of MY songs was mind-blowing. I then asked my friend, Josh, from SYLOSIS, who is a ridiculous shredder, and my other friend, Amit. I met Amit through his working at a metal magazine publication, but mainly from at festivals involving alcohol; ridiculous shredder, too!

"Do not take a full impression of the whole album from this song; every track is different.

"Hope you enjoy my cheese-fest of 'Guitarists Playing Guitars'!"

For anyone brave enough to attempt playing any songs from the album, there is also a deluxe 242-page tab book, featuring full tablature for both guitar and bass, transcribed by Ol Drake himself.

"Old Rake" was recorded at the guitarist's home studio and was mixed with producer and former DEATH, TESTAMENT and OBITUARY guitarist James Murphy.

The album is also available to pre-order now on iTunes, including an exclusive bonus track as well as an instant download of "Guitarists Playing Guitars".