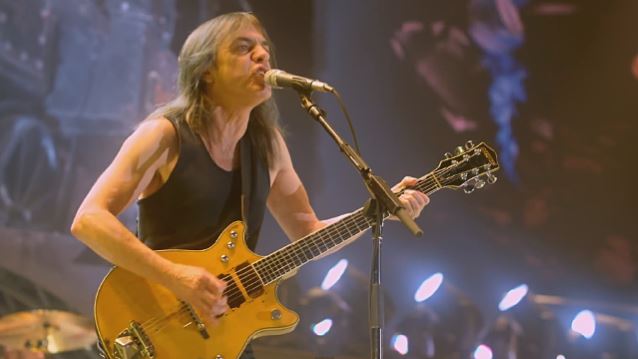 The funeral for AC/DC guitarist Malcolm Young will be held on Tuesday, November 28 at St Mary's Cathedral in Sydney, Australia. According to News.com.au, it will be held at 11 a.m. on the same day as the annual celebration of Australian music, the ARIA Awards.

Malcolm, who co-founded AC/DC with his brother Angus in 1973, died on Saturday (November 18) at the age of 64 after suffering from dementia and failing health for several years.

Malcolm retired from AC/DC in 2014 after his health issues were made public.

Angus carried on as the sole original member of AC/DC, with his and Malcolm's nephew Stevie replacing Malcolm in the lineup for the recent "Rock Or Bust" LP and tour.

Artists around the world have continued to pay tribute to Malcolm in the wake of his passing, with GUNS N' ROSES and FOO FIGHTERS both performing AC/DC songs in recent days to memorialize the fallen guitarist.

Malcolm and Angus's older brother George, a member of "Friday On My Mind" pop act THE EASYBEATS and co-producer of many of AC/DC's now-classic early albums, preceded Malcolm in death last month at the age of 70.

Malcolm was born in Glasgow, Scotland in 1953 and moved with his family to Australia 10 years later. He formed AC/DC in 1973 with Angus and led the band until his retirement, playing on every album except "Rock Or Bust". He and Angus are co-credited with every song in the AC/DC catalog.

AC/DC rose from its beginnings in Australia to become one of the biggest and most enduring rock bands in the world on the strength of its live show and iconic albums like "Highway To Hell", "Back In Black" — which remains one of the highest selling LPs of all time — and "The Razor's Edge".

Malcolm told The Pulse Of Radio years back that AC/DC always wanted to give its fans a spectacular show. "They pay good money for a ticket," he said. "They want to see things. They want lights, and they want bigger. They want this and that. We understood that. The band's all about entertaining."

Malcolm's exit ended up being the first in a string of departures that included longtime drummer Phil Rudd, who was confined to house arrest after being found guilty of drug charges, and singer Brian Johnson, who faced total hearing loss if he stayed on the road. Bassist Cliff Williams also announced his retirement after a nearly 40-year run with the band at the end of the "Rock Or Bust" tour.

Angus did assemble a new lineup to complete the band's touring commitments last year, including GUNS N' ROSES frontman Axl Rose on the mic, but has not made any public announcements yet about the group's future.