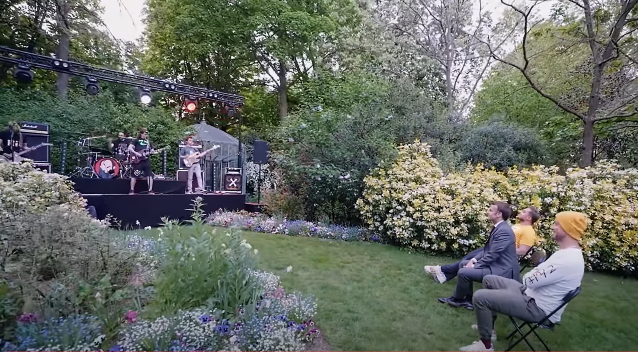 French president Emmanuel Macron attended a private concert by the "parody metal" band ULTRA VOMIT in the gardens of his Elysee presidential palace as part of a YouTube video by two comedians.

According to Reuters, Macron challenged two popular French YouTube comedians, McFly and Carlito, who have over six million subscribers on YouTube, to make a video about the need to wear masks, disinfect hands and keep a safe distance to slow the spread of the coronavirus. As an incentive, he promised they could film their next project in his Elysee palace if the video hit 10 million views.

McFly and Carlito won the bet and were allowed to shoot a 36-minute video, which ends with a stroll in the Elysee gardens, where ULTRA VOMIT performs a hard rock version of the French lullaby "A Green Mouse" ("Une Souris Verte"). Check out the clip below.

Hailing from Nantes, France, ULTRA VOMIT has recorded a few demos and three albums, "M. Patate" (2004), "Objectif: Thunes" (2008) and "Panzer Surprise!" (2017). Their style and lyrics are described as "totally crazy," generally inspired by cartoons or TV commercials. They have also made new versions of famous French children's songs like the aforementioned "Une Souris Verte" and "Bouba The Little Bear".