The tracks include a long-anticipated track from QUEEN and Michael Jackson, "There Must Be More to Life Than This", a previously unfinished Mercury-QUEEN track, "Let Me In Your Heart Again", originating from the band's "The Works" album recording sessions, and a scorching new stripped-down ballad version of Mercury's first solo hit, his Giorgio Moroder collaboration, "Love Kills".

The rest of the package brings together QUEEN hits, classic tracks, and new takes on well-known songs, matched with band recordings Brian May describes as "things that we have collected together that are representative of our growth rather than the big hits" in a collection immaculately assembled by May and Roger Taylor themselves. The tracks are all linked to represent a definitive collection of QUEEN's timeless love songs.

"Queen Forever" is available as a 20-track single CD and as an extended 36-track, two-CD set, and celebrates the extraordinary musical path of one of the world's greatest rock bands.

Anticipation for these new Mercury tracks has been high since May and Taylor first hinted earlier this year that new tracks featuring Mercury were being explored.

Speaking at the press conference to launch their North American concert tour with singer Adam Lambert earlier in the year, May said: "There was a little bit more in the can that we had overlooked for a long time, so we have a few songs which we're working on right now. Freddie sounds as fresh as yesterday."

On the subject, Taylor said: "We've got some great new tracks that haven't been heard and there's an interesting selection of older stuff."

The QUEEN and Michael Jackson duet, "There Must Be More to Life Than This", began as a song written by Mercury during sessions for QUEEN's 1981 album, "Hot Space". The band recorded a backing track, but the song was never completed. Mercury visited Michael Jackson at his home studio in Los Angeles where he recorded Jackson singing the song for an unfinished version. QUEEN revived the track during sessions for 1984's "The Works", but again it was not finished. A year later, Freddie's own version of the song surfaced on his debut solo album, 1985's "Mr. Bad Guy". This new production of the powerful ballad fuses QUEEN's original backing track and Mercury and Jackson's distinctive vocals, and has been produced and remixed by celebrated Madonna/Robbie Williams producer William Orbit.

Talking of his involvement, Orbit said: "I had known Roger for many years. Now he was on the phone asking if I would get involved in this musical adventure.

"When I first played it in my studio, I opened a trove of delights provided by the greatest of musicians. Hearing Michael Jackson's vocals was stirring. So vivid, so cool, and poignant, it was like he was in the studio singing live. With Freddie's vocal solo on the mixing desk, my appreciation for his gift was taken to an even higher level.

"The musicianship of all four members of QUEEN is phenomenal. Roger, an extraordinarily multi talented man I've always admired. John Deacon's original bass part with its lyrical fluidity that made it easy for me to know where to put the odd reinforcement. Freddie's original piano carried most of the song's musical DNA. Brian, one take for the solo, a blur of fingers, and the spirits of MJ and FM fully present, in the moment, sending shivers down the spine."

Perhaps the biggest revelation on "Queen Forever" is Brian May's composition, "Let Me In Your Heart Again". The song was first recorded by "Queen For The Works" album, but not completed at the time and has remained overlooked since then. An authentic, live-in-the-studio track from the same golden age as "Radio Ga Ga" and "I Want To Break Free", this never-before-heard QUEEN track shows off Freddie's timeless vocals and features newly recorded guitar parts and new backing vocals from Brian and Roger. This thrilling track finally reaches us nearly 30 years after Freddie first laid down his original vocal.

The third new track, "Love Kills", was composed by Freddie Mercury and famed German producer/songwriter Giorgio Moroder for the soundtrack to Moroder's newly restored and tinted version of Fritz Lang's 1927 classic silent movie "Metropolis" in 1984 to which he added a pop soundtrack featuring various music artists. Mercury recorded a high-energy dance version of the song that became his debut solo hit in 1985. However, it is less well known that all four members of QUEEN played on the original track. Prior to QUEEN embarking on their recent tour with lead singer Adam Lambert, Brian May proposed performing an acoustic ballad version of "Love Kills", which became one of the most memorable moments of the current QUEEN & Adam Lambert shows. This new QUEEN-Freddie studio version is shaped in the same ballad style and revives the QUEEN original with some newly recorded guitars and drums by May and Taylor, becoming a glorious showcase for one of Freddie's most adrenaline-charged vocal performances.

Alongside this new material, both the one and two-CD versions of "Queen Forever" feature songs that spotlight the band's songwriting prowess, studio experimentation and remarkable development. It's a timely reminder that, almost uniquely in the world of rock and pop, all four members of QUEEN were accomplished songwriters and superlatively gifted musicians.

"Queen Forever" reaches back as far as 1974 with fan favorite "Nevermore", a Freddie Mercury song originally included on "Queen II", the album that first saw QUEEN use the recording studio as an instrument in its own right. From the same year comes the dramatic power ballad "In The Lap Of The Gods… Revisited", once the grand finale of any QUEEN show, and since revived by QUEEN and lead singer Adam Lambert on their 2014 tour. Meanwhile, the upbeat single "You're My Best Friend", written by bass guitarist John Deacon, showcased QUEEN's poppier side and was released as the follow-up to 1975's "Bohemian Rhapsody", becoming a Top 10 UK and Top 20 US hit in the same year and gave John Deacon his first QUEEN hit single.

Elsewhere, 1977's "Long Away" remains the only QUEEN single to feature Brian May on lead vocals; and the same year's B-side Drowse" includes a rare QUEEN performance from Roger Taylor on guitar. QUEEN saw out the decade with a run of hits that included the gospel-flavored "Somebody To Love", memorably performed by QUEEN and George Michael at the Freddie Mercury tribute concert in 1992, and finished on a high with '79's U.S. No. 1 hit, "Crazy Little Thing Called Love", an exuberant rockabilly pop song composed by Freddie Mercury in the bath in Munich.

By touching on prog rock, gospel, acoustic balladry, Elvis-style rock'n'roll and more, these songs alone encapsulate QUEEN's diversity in the 1970s. However, the band threw out the rulebook completely in the decades that followed, embracing funk, hard rock, soul and pure pop, but always sounding unmistakably QUEEN. The band used synthesizers for the first time on 1980's "Play The Game" single; Freddie sang some of his vocals in Spanish on the 1982 hit "Las Palabras De Amor", and 1986's "One Year Of Love" featuring unusually a saxophone. The album is completed by latter-day QUEEN hits, including '91's No. 1 "These Are The Days Of Our Lives" and '95's "Too Much Love Will Kill You", together with the poignant "A Winter's Tale", recorded during Freddie Mercury's final QUEEN recording sessions in Montreux in 1991.

"Queen Forever" is both a showcase for these exclusive new recordings, but also an enduring tribute to the extraordinary musical achievements of John Deacon, Brian May, Roger Taylor and the late, great Freddie Mercury whose singular talent we can again get to marvel at with the arrival of these previously unheard tracks.

"Queen Forever". Forever? Who can tell? But for now we can be certain that this highly rewarding collection of QUEEN new, rare, and at their most accomplished, more than serves to uphold the band's indisputable place in music history and is certain to earn a prized place in music collections for a long time to come.

QUEEN certainly rates in the top among Britain's favourite bands. The UK's Official Charts Company earlier this year confirmed QUEEN's 1981 "Greatest Hits" album as Britain's best-selling album of all time all after surpassing the 6 million sales milestone. A staggering one in three British households now own a copy of the iconic act's original best-of collection.

And if 6 million sales isn't enough for the band, QUEEN's follow-up, "Greatest Hits II", which was released in October 1991 also rides high at No. 10 in the all-time Official Albums Chart, having notched up a further 3.9 million UK sales to date. 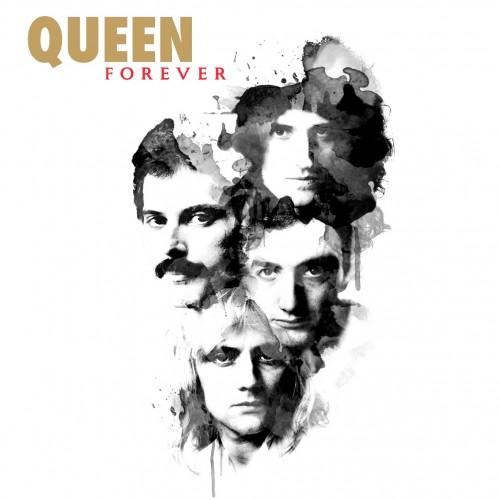