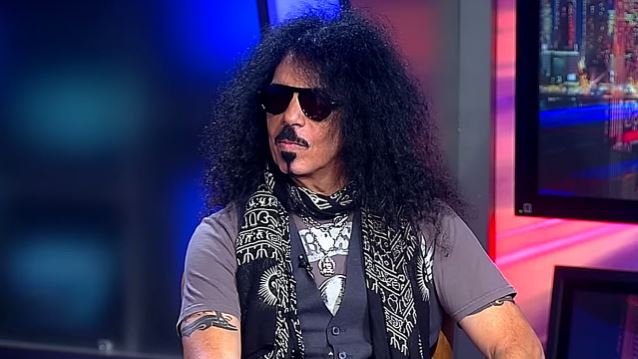 Following the critical success of "Quiet Riot: Well Now You're Here There's No Way Back", the feature documentary on the seminal heavy metal band QUIET RIOT, drummer Frankie Banali is enjoying a newfound appreciation both for his contributions to music and devotion to keeping the memory of his friend and former frontman Kevin DuBrow alive.

Banali sat down with Steve Lacy, the 10 o' clock anchor at Fox 5 in New York City, for a wide-ranging discussion about his rock 'n' roll roots, drinking all night with Alex Van Halen before the US Festival and Kevin Dubrow's brother, famous plastic surgeon and reality TV star Dr. Terry Dubrow.

When asked about the current state of music and singing competition series like "American Idol", Banali summed it up about as well as you can, saying: "Being in a band should be something that's organic; it should not be something that's corporate or, you know, you put it in a microwave and it's done in 30 seconds. You've gotta bake it for a number of years.

"I'm really grateful that, living in New York, and then I was living in Chicago for a while, when you were in a bar band, you did four, five and six sets a night of cover songs, so you had to learn a huge variety of music by a huge variety of artists and styles," he continued. "That's a lost art. Nobody does that anymore. They wake up on Monday, they decide that this is the kind of music that they like and this is the kind of music they're gonna do, and by Friday, it's on 'American Idol', sink or swim."

Banali added: "You've gotta do the time. Look at it this way: a surgeon doesn't become a surgeon in one year. Any professional does not become at the top of their game in one year. It takes time."

Frankie also spoke about how the advent of the Internet and cell phones has changed the touring lifestyle. He said: "It keeps you honest in that you can do a performance… I mean, I can tell you that we've done a show and when I go back to the hotel room, I've got an alert on my e-mail, and it's already on YouTube. So it keeps you on your toes." He added that things were much different in the 1980s when a touring band was "like pirates. It was, like, the tour bus was the ship and we'd roll into town, and it was 'rape and pillage,' and it was great," he said. "And you got away with a lot — because nobody could track you down; there were no cell phones, [there were] early versions of fax. Now you get on a tour bus and you've got satellite TV and you have your cell phones and you can go online and all that. Back then, you had the bar; that was it. You had nothing else."

Speaking about the success of "Quiet Riot: Well Now You're Here There's No Way Back", Banali said: "I didn't know it at the time when director/producer Regina Russell came to me with the idea, after we had a conversation on the subject of QUIET RIOT, and she thought it might be a good idea to do a documentary. And at the time I had no idea, first of all, how it was possible and how it was gonna turn out, but I had no idea that what it has done is that, on one level, it's elevated the band interest, or the interest in the band. But, on a much greater level, what it's done is it's shown the fans of QUIET RIOT and people that weren't fans of QUIET RIOT and weren't aware of the band, what it really is like to be in a band. It's not as glamorous… It can be, for that two hours on stage, but it's not as glamorous as a lot of people think. It's a lot of work, and a lot of the problems that so many people have in life, just in regular jobs, you can see that we have within this thing called being in a band. And it's really, really helped the perception of the band. So there's a much greater interest in the band ever since the documentary came out."