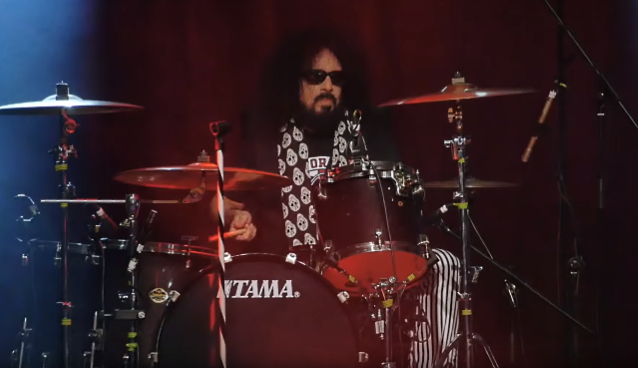 Frankie Banali played with his QUIET RIOT bandmates Saturday night (October 26) at the Whisky A Go Go in West Hollywood, California. The show marked the drummer's first performance with the group since he announced he was diagnosed with stage four pancreatic cancer.

Fan-filmed video footage of the Whisky concert can be seen below (courtesy of Sandi Oba).

Last week, Banali revealed in a social media post that he has been battling the disease since this past spring, saying that he is "feeling much better and stronger now" and vowing to play with QUIET RIOT this month and through 2020. He told LA Weekly that the plan is for him to "continue treatments based on a schedule that won't interfere with me returning to playing live dates. I will be able to fly to dates again around December of this year," he said.

QUIET RIOT played several shows this year without Banali, marking the first time ever that the band performed without any of the members from its classic lineup: Banali, singer Kevin DuBrow, guitarist Carlos Cavazo and bassist Rudy Sarzo.

QUIET RIOT went through two vocalists — Mark Huff and Scott Vokoun — before settling on Jizzy Pearl in 2013. Pearl announced his exit from QUIET RIOT in October 2016 and was briefly replaced by Seann Nichols, who played only five shows with the group before the March 2017 arrival of "American Idol" finalist James Durbin. Pearl returned to QUIET RIOT in September.

Quiet Riot at Whisky A GoGo