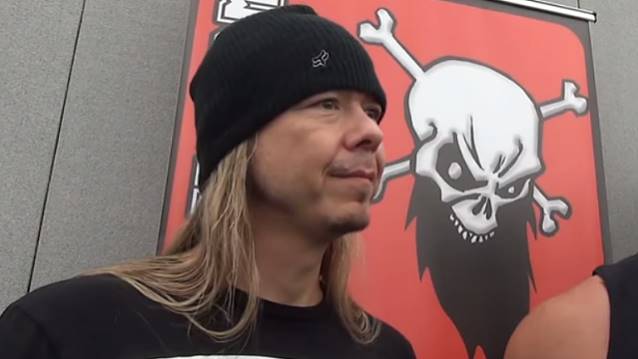 "Midlands Rocks" conducted an interview with FOZZY guitarist Rich Ward at this year's Download festival, which took place June 13-15 at Donington Park in Leicestershire, United Kingdom. You can now listen to the chat using the Mixcloud widget below.

FOZZY will release its new album, "Do You Wanna Start A War", on July 22 via Century Media.

Fans can now pre-order the 12-track album at iTunes and receive an instant download of the song "One Crazed Anarchist".

The official lyric video for "One Crazed Anarchist" can be seen below.

Produced by FOZZY guitarist Rich Ward, "Do You Wanna Start A War" features 12 tracks, including the debut single, "Lights Go Out", the title track and the return of the Theremin in "Bad Tattoo". SLIPKNOT and STONE SOUR singer Corey Taylor recently described the CD as "dark, dense and sharp. Sonically and lyrically, this feels like it's going somewhere big. I love it!"

Asked about whether FOZZY's new album will feature any special guests, singer Chris Jericho told the Boise, Idaho radio station 100.3 The X Rocks: "I mean, we always have a guest or two on every record, because… It's interesting when you see… You listen to Top 40 radio — every radio when I drive my kids to school, we listen to it — and you'll always hear Jay-Z plus Beyonce, or featuring Beyonce, or Rihanna featuring Lil Jon. And we thought, why don't we do more of that in rock and roll? I man, that's what we did. The last record, we had 'Sandpaper' with M. Shadows [AVENGED SEVENFOLD] and we had 'She's My Addiction' with Phil Campbell of MOTÖRHEAD. So this record we have one collaboration — a song called 'Tonight' with Michael Starr from STEEL PANTHER, who we toured with in Australia; a great singer. And we like that vibe. Musicians like jamming with other musicians; it's kind of what we do."