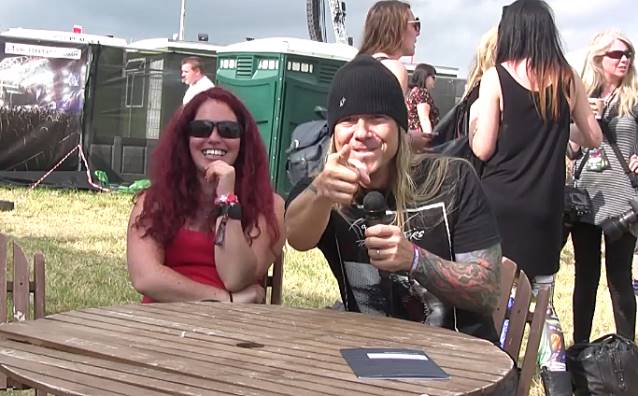 Felicity Hall of GetYourRockOut conducted an interview with FOZZY guitarist Rich Ward at this year's Download festival, which took place June 13-15 at Donington Park in Leicestershire, United Kingdom. You can now watch the chat below.

Speaking about the diversity of audiences at heavy metal shows, Ward — who is also a member of rap-metal pioneers STUCK MOJO — said: "Metal always gets weird… and I don't even know… but it gets this weird reputation of being racist or homophobic. It's, like, why? And they say, well, there's a not lot of black people at the shows. It's, like, black people are welcome. We don't have a sign [saying that no blacks are allowed to attend metal concerts]. But it's about culture. And that's the one thing that people don't realize… Because there's not a lot of gay heavy metal bands, that doesn't mean that that culture is not welcome, it's just that we gravitate towards things that we are culturally drawn to, and black culture, in general, is drawn to music that came up in black culture… you know, rap music, R&B, blues, jazz, and there are places where those cultures can meet, and they often do. But even LIVING COLOUR and bands like FISHBONE, they don't have large black audiences. They play rock music, so they have a mainly white audience. So it has nothing to do with color, it has to do with culture."

FOZZY will release its new album, "Do You Wanna Start A War", on July 22 via Century Media. Produced by Ward, the CD features 12 tracks, including the debut single, "Lights Go Out", the title track and the return of the Theremin in "Bad Tattoo". SLIPKNOT and STONE SOUR singer Corey Taylor recently described the CD as "dark, dense and sharp. Sonically and lyrically, this feels like it's going somewhere big. I love it!"