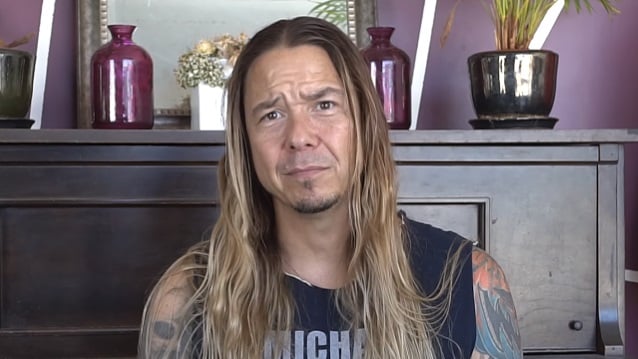 FOZZY and STUCK MOJO guitarist Rich Ward was recently interviewed by Kristyn Clark of Pop Culture Madness. You can now watch the chat below.

Asked what he would like to change about the music industry, Ward said: "I wouldn't change anything about the music industry, just because I'm afraid that if I changed it, maybe I wouldn't have a career. I'm just kind of lucky. I'm a very average guitar player. There was four guitar players in my high school, and I was the worst. But you know what I had that they didn't have? The willingness to get in the van for five years and starve to death and play for free in the worst crapholes in America and sleep in people's closets. Because after the show, when the party was going on, I had to drive the van the next day, so I would just find a closet and curl up in my sleeping bag. And that's basically living like a homeless person for many years that I did. We had a rehearsal place, and there was no bathroom. We had no home, so when we came off a tour, we lived in our rehearsal space. And there was a building next door that had a spigot, and we would put the hose over the fence and we would shower outside. It was behind the building, so if we showered late enough at night, no one would see us. It would [run] cold water in the winter.

"That's why I'm 19 albums into my career being a fairly average guitar player — because I'm just a hungry, rabid dog that wanted it more," he continued. "And maybe that's just because I'm more passionate about music. I missed out on high school reunions and family vacations. And I don't have kids, because I just felt like it would be hard for me to be a good dad and still be out here [on the road], so I've chosen to sacrifice some of the greatest joys in life, because this is what I wanna do."

Ward added: "On one side, I can easily slap myself and say, 'Ah, you're okay, dude,' but honest to god, it's the same thing as a lot of athletes. There are a lot of gifted athletes, and then there's a lot of people who don't have as good of genetics but are willing to work harder on the field and are willing to hustle and have a good attitude, and those are the ones who will succeed. So somewhere between 'lucky' and 'I'll outwork the other guy.' I'm lucky to be here, so I'm not changing anything about this business."

FOZZY is continuing to tour in support of its latest album, "Judas", which was released last October via Century Media. The production duties on the disc were handled by Johnny Andrews, who co-wrote FOZZY's "Lights Go Out" track back in 2014 and has written songs with the likes of ALL THAT REMAINS, THREE DAYS GRACE and HALESTORM in the past.

FOZZY singer — and WWE wrestling superstar — Chris Jericho recently told WDHA-FM 105.5 FM that the band will re-team with Andrews for its next album.