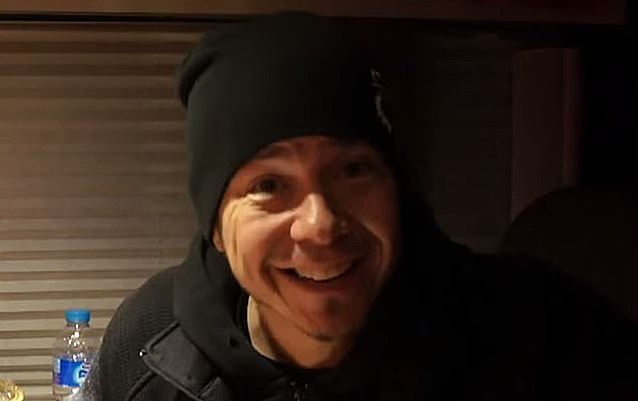 MikeJamesRockShow.com recently conducted an interview with FOZZY guitarist Rich Ward. You can now watch the chat below.

Speaking about how FOZZY's musical diversity was inspired by the bands that he grew up on, Ward said: "Music was cool in the '70s. There was something… There weren't computers… Listen, I make records with computers because that's the way you make records now. You could make records on tape. It's almost impossible to find a working tape machine. It's almost impossible to find tape stock to put on the working tape machine. It's like finding a dinosaur egg, you know what I mean?! We're talking about something that's almost extinct. Well, dinosaur eggs are extinct. Bad example. Sorry.

"The last record I did on tape was 1997, and I loved it; it was great. Everything [since then] has been done digitally. But there is something magic about the idea that a band writes songs together and they rehearse them to death and they get in there and they… Everybody in the band can sing, and everybody in the band can play, and if the bass player wanted to, he could get on piano and play. Everyone was such a badass; it was, like, weird. And I think part of it, too, was that, growing up back then, there weren't tons of records being released, because there were only, like, fifteen labels. And every label put out a few releases every year. So it wasn't, like, thousands and tens of thousands of releases, like there are now. Like, there may be, in any given month, a hundred or two hundred metal releases, and some are on super-small indies and some are self-released. But there's so much material out there. And I think what ended up happening was…"

He continued: "Imagine if football, [or] American soccer, imagine if there were ten thousand teams, every team wouldn't have amazing players. But in the Premiership, there's only twenty teams, which siphons out a lot of players that are crap. Only the elite get to play there. So I think back in the '70s, it was almost like, to get to that top level, there was a certain process that you had to go through. Now, were there teen idols that maybe weren't as talented as, say, TOTO or, like, the OHIO PLAYERS or something. Of course, there's always going to be some people that are gonna squeak through, because they have great charisma or personality, but still, those were the exception to the rule. Even Michael Jackson, even though he was a pop star, he could sing his ass off.

"In any case, so the idea of [FOZZY] doing something… a cover [on the band's latest album, 'Do You Wanna Start A War']… I suggested [ABBA's] 'S.O.S.', because I thought the song, the verses are really sad. It's a great song, because 'S.O.S.' could have been recorded and written by QUEEN — piano, lovely melody and then the rock part. And I also loved that era because there weren't any rules. Like now, if you're MACHINE HEAD, you couldn't go too far outside of who you were, because there would be some criticism. Because people put you in a category — you are this kind of band and therefore you must do this kind of music. In the '70s, you had Freddie Mercury doing piano ballads and full-on, balls-out rockers and then these really weird ragtime songs and then rockabilly songs. I love that. And I make records like that. And sometimes… It doesn't always get reviewed well, because they'll say, 'Wow. The songs are all over the map.' But those are the bands I grew up with, those are my influences, that's what I love, so…"

Ward added: "I always told people: I will make the kind of album you want me to make for five million dollars. You know what I mean?! Just think about it. Going to work, people don't pay you for the work that you do, because most people that go to work, it's generally because they either really like it, and this is their career path, or it's kind of, they just do it to get by and get money. So if you're doing it just to get by and make money, then the paycheck is just to… How much shit will I tolerate for how much money? Do you know what I mean? If you work in a restaurant, you think, 'Hmm. How much money am I gonna make in a night, and is it worth it for the shit I'm gonna have to put up with, slaving over a grill, or being a waiter, or washing dishes?' I've worked in a million restaurants, and that's what I always had to ask myself: How much work am I going to have to put up and what value do I put on that? How much crap am I gonna have to put up with?

"I've played with some other people outside of my own bands, but for very short periods of time, because… To play in a really big band that isn't mine, meaning I'd have to play somebody else's music, so I wouldn't really have the emotional connection to it… It would basically be like playing in a covers band, because you'd be covering someone else's song… There'd have to be a check attached to that. And then I would have to assess: how much do I wanna play in that band? How much shit am I gonna have to put up with with these guys? And how much money would it take?

"In my own band, I play for free. 'Cause I love it. There's been tours we've done where I've lost money. Where it costs money to go, because I wanna do this tour, and the expenses of going and traveling across America and these huge drives, and having a road crew, and having equipment, and just the cost of gas. And sometimes you make great money. And that's offset by the times that you lose a little bit. I don't even care.

"I always tell my manager, I don't care how much money we make. Is it enough that, at the end of the month, what little bills I have, can I get by? And if not, do I have enough saved from the last tour that I can eke by it?

"For me, again, it really comes down to, I love playing guitar, I love being in a band, I love making music, I love gigging, I love making records. And when I was 16, I would have paid any amount of money to do it. And I try to keep that in mind — that now that I'm 46, many years down the road, not to lose sight of that passion, of why am I doing it? Having pure motives."

"Do You Wanna Start A War" sold around 5,600 copies in the United States in its first week of release to debut at position No. 54 on the Billboard 200 chart. The CD was released on July 22, 2014 via Century Media.