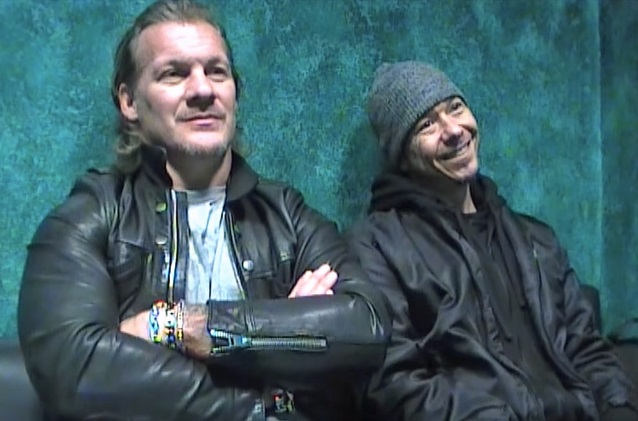 Rock Rebel Magazine conducted an interview with FOZZY members Chris Jericho (vocals) and Rich Ward (guitar) before the band's November 10 concert at the Live Music Club in Trezzo Sull'Adda, Italy. You can now watch the chat below.

Speaking about FOZZY's latest album, "Judas", Jericho said: "Well, I think every band, when they do a new record, says it's their best, and they should say that. If they said, 'This is our third-best album we've ever recorded,' I wouldn't feel too good about it. But I think in this case, it really is our best. Definitely already our most popular, with 'Judas', the song itself, [which] has just become a bona fide hit song pretty much around the world at this point. And then the record that followed is filled with songs just as good [as], if not better than, 'Judas'. So it's a really cool time, because I call it 'the 'Judas' effect' — you can see all of these great things happening because of the album and because of the song. And our old fans are very happy, and we're making so many new fans as well and coming to new countries and new places, because the band now is bigger than we've ever been, just on the strength of this new album."

Regarding the video for the "Judas" title track, which was filmed in Smyrna, Georgia, Jericho said: "We had an idea from a video years ago, a GUNS N' ROSES video called 'Garden Of Eden'. And it was just the one camera straight and then one take. And that's what we did. We figured, let's make an updated version with more action and things that you don't notice behind the scenes that you have to watch a few times to really check in the background. So this video that took us eight minutes to film, because we filmed it at half speed, so when you play it back at normal speed, it looks very weird… It took us eight minutes to film and [it was] probably the cheapest video we've ever recorded and it's now over… it's almost at 11 million views now. Every month it gains another million views; it won't stop. And it's incredible, 'cause it was the quickest and the cheapest video and by far the most popular. I think it's the reason why 'Judas', the song, is so popular, because even when you come to a country like Italy, maybe there isn't a lot of rock and roll radio, but everybody watches YouTube. I saw last night, in France, they have the lyrics transposed in French in captions, so in different countries they have the lyrics translated for them, but it still all counts toward the same YouTube number, so it's just grown completely out of control. Which, to us, we never expected it, but I can't say I'm surprised, because it's been a long time of us getting very close, and then this time, we finally get to the prize. We win the World Cup with this one."

"Judas" was released on October 13 via Century Media. The production duties on the disc were handled by Johnny Andrews, who co-wrote FOZZY's "Lights Go Out" track back in 2014 and has written songs with the likes of ALL THAT REMAINS, THREE DAYS GRACE and HALESTORM in the past.