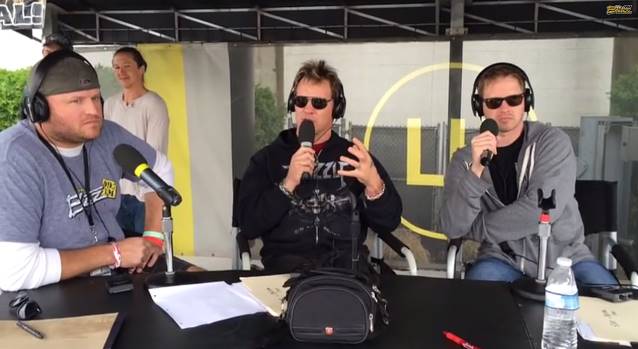 Nuber and Baker of 99.7 The Blitz radio station conducted an interview with FOZZY singer and WWE wrestling superstar Chris Jericho at at this year's Rock On The Range festival, which was held May 16-18 at the Columbus Crew Stadium in Columbus, Ohio. You can now watch the chat below.

Asked how he would compare wrestling in front of large crowds to performing at huge festivals like Rock On The Range, Jericho said: "The comparison is just the rush of being in front of a live crowd. You've gotta connect with the crowd and you've gotta always be the party host for the people, Especially on a day like this, because it is very cold and rainy, but if you can get people involved in the show, that takes their mind away from the weather and they just get enjoyment from a great rock and roll show. Anytime you're in a live element, whether it's music or wrestling or live theater or whatever, you have to have a connection with the crowd; it's the most important thing. It's more important than nailing every single one of your shows. If you're connecting with the crowd and getting them involved in what you're doing, it's always gonna be a great show."

He added later in the interview: "When I started wresting, I wanted to be the ultimate rock and roll frontman in wrestling, I wanted to be the Paul Stanley [KISS] of wrestling, the Dave Lee Roth [VAN HALEN] of wrestling. So when I started becoming big in the WWE, the Y2J character was, basically, just the same traits and characteristics that I had ripped off from Paul Stanley or James Hetfield [METALLICA]. So then when we started FOZZY, I took the same characteristics that I was using in wrestling that I had stolen from rock and roll and just brought it back into rock and roll. So it's all a very similar circle of show-business pomposity, shall we say."

Jericho also spoke about the possibility of one day appearing in a Broadway musical. He said: "I would love to do Broadway. I had Sebastian Bach [SKID ROW] on my podcast a couple of weeks ago; he did great on Broadwya, because, once again, you're performing. Anytime you can perform… And singing is acting; you have to get into it, you have to believe what you're singing and believe what you're doing, and, once again, believe in the show that you're putting on. 'Cause people aren't stupid; they can sniff out smebody that is real, they can sniff out a fake from a mile away. If you get their trust and you make them realize that we will have a great time at this show, [they'll] have a great time watching this play or whatever, they'll get more involved and get into it."