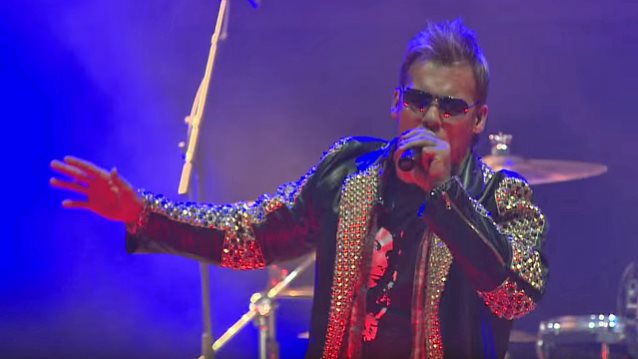 Planet Mosh recently conducted an interview with FOZZY singer and WWE wrestling superstar Chris Jericho. You can now listen to the chat in the YouTube clip below.

Speaking about FOZZY's plans to write and record the follow-up to 2014's "Do You Wanna Start A War" album, Jericho said: "We're working on it now. We're kind of in the initial stages of working on the next record. The tour that we have, 'The Cinderblock Party', in the U.K. and Europe, once that's finished, that's the end of the 'Do You Wanna Start A War' tour cycle, and then it's time to start writing and get into the studio to do the next record. So we're planning on having something out next summer."

Jericho also talked in more detail about FOZZY's songwriting process. He said: "We don't put any boundaries on who we are as a band. Is this song too heavy, is it too poppy? What is the vibe behind it? And that's something we take great pride in the fact that when people come to a FOZZY show and, for the most part, listen to a FOZZY tune… I mean, 'Lights Go Out' was Number One on the 'strip club' chart in the U.S. — meaning that strippers danced to 'Lights Go Out' more than any other song in the world. And I wasn't aware there was a 'strip club' chart, but there is, and that's good, because that's kind of the vibe that we have — it's that music people can dance to, but it's a little bit dirty, it's a little bit wild. But, basically, it makes you feel upbeat and fun and makes you feel good. And that's what we want. There's not a lot of crowdsurfing or moshing at FOZZY shows, but there's a lot of jumping up and down and chanting and screaming and yelling and showing your boobs and all that sort of stuff. And that's our mission: we want people to have a great time, and ninety-nine percent of the time, they do."