FOZZY — the band featuring former WWE wrestling superstar Chris Jericho alongside members of STUCK MOJO — has announced the "Unleashed In The West" 2019 headline tour. The U.S. trek, which includes special guest Jared Nichols James, starts on September 5 in Denver and wraps on September 28 in Atlanta. The FOZZY members will take a break from the studio to tour for the first time in 2019 as they prepare for the release of their new record.

Says Jericho: "When we got the call to join IRON MAIDEN on their Banc Of California Stadium show in Los Angeles, we knew two things were imminent. One, this might be the biggest show FOZZY has ever played. Two, one show isn't enough. So we decided to head out all across the western U.S. to spread the Fozzpel and celebrate this great time in our lives! Plus, it gets us out of the studio for a breath of fresh air... it gets a little stuffy in there sometimes when you're recording a new record! So come ROCK with us and be a part of the most energetic, electric and FUN rock n roll show in the world today. Don't miss FOZZY 'Unleashed In the West'!!!"

Guitarist Rich Ward adds: "It's been almost six months since we wrapped up our amazing 200-city tour in support of the 'Judas' album. Since then, we've been sequestered to a top-secret bunker where we are writing what will become our next record. As much as we love the creative environment of the studio, there is no substitute for loud amps and the unique exchange of energy that only occurs on the big stage. In September, we return to that stage, in what will be one of our biggest and boldest tours to date. Grab your helmets and dancing shoes, FOZZY is coming to town!"

Jericho co-founded FOZZY with Ward in Atlanta in 1999. 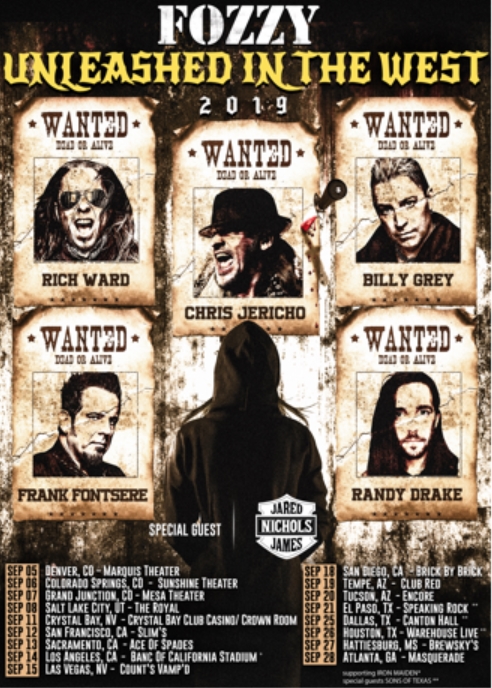