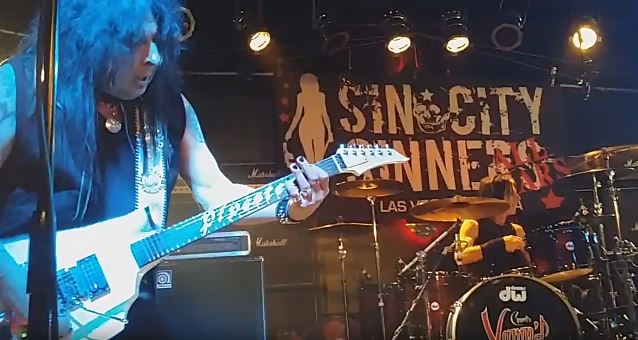 The following songs were performed:

Riley told BLABBERMOUTH.NET last week that he was interested in reuniting W.A.S.P.'s classic lineup with Piper, Blackie Lawless and Chris Holmes. He said: "A lot of bands have gotten back together and had reunions. The original W.A.S.P., we have never gotten back together. I'm talking about the four guys who were on the first couple of albums. Blackie has always had good technical players with him, but we had four personalities in that first lineup of W.A.S.P. It was not only great players, but we had personal things going on, too, where each guy was controlling a section of the stage.

"If it was up to me, I would love to see, even in a limited edition, a W.A.S.P. reunion where all four of us got together. Even if it was limited, that's what a lot of bands are doing; they're doing their regular gigs, then specialty gigs on the side. Even if it turns into something like that, I'm totally down."

Asked if he has been in touch with Blackie at all, Riley said: "I haven't talked to him for about five years. The last time I talked to him was when W.A.S.P. and L.A. GUNS went on a tour together in the U.S. It was a lot of fun seeing him. We put everything aside. We had so much fun, the four of us in those three or four years."

He continued: "What's really promising is that Randy has been in touch with him [Blackie]. Those two… they had a pretty bad falling out when Randy was let go. I'm glad to hear that they're talking and they're friends again. I'm still friends with Blackie, Chris and Randy. If they're talking, it raises the possibility that we could do some dates. I'm not saying it's done. I'm just saying with open communication, it's really promising to see."

Riley was optimistic that a W.A.S.P. reunion could see the light of day in the not-too-distant future. "The good thing about it is that we're all still alive," he said. "Everybody has stayed active musically, so it's not like picking somebody out of the mothballs. Everybody's been playing a lot, so this is maybe the first salvo with me and Randy playing some shows and doing the old W.A.S.P. material. I hope it leads to something, even a limited thing like what DOKKEN is doing, it would be great and I'd be all in."