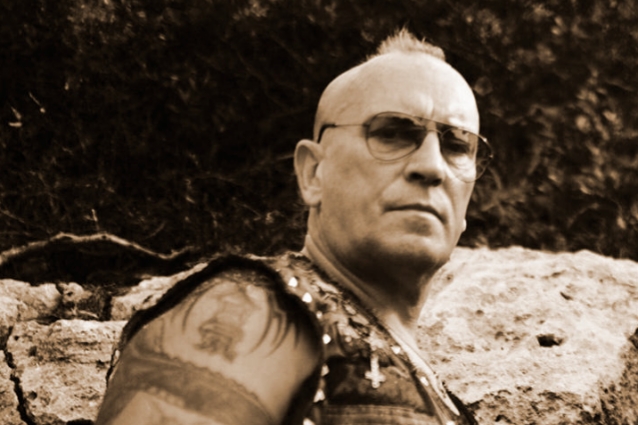 For its very first European tour in 1984, METALLICA hooked up with black metal pioneers VENOM, on the latter's "Seven Dates Of Hell" tour, which included concerts in Switzerland, Germany, France, Belgium and the Aardschok Festival in the Netherlands.

In a brand new interview with "The Chuck Shute Podcast", former VENOM and current VENOM INC. guitarist Jeff "Mantas" Dunn recalled the trek, saying (as transcribed by BLABBERMOUTH.NET): "Lars [Ulrich, METALLICA drummer] was pretty fucking rowdy. I remember we were in a motel somewhere, and it was my manager that stopped me coming out of the motel room, 'cause I was gonna go upstairs and kill Lars at one point, 'cause he was just partying all night, and we had a flight to get to the next day. He was, like, 'Oh, no, no, no, no.' He said, 'I'll go and sort it out.' I was going, 'I'll fucking kill him.' I mean, fucking hell.

"I've met them quite a few times since that period, and we always talk," he continued. "I think it was 2016 or '17, we were doing an American tour as VENOM INC., and we played in San Francisco, and James [Hetfield, METALLICA frontman] came down to see us. And it was so weird. I was on stage, and I looked up into the balcony, and there was James Hetfield fucking air-guitaring and signing every fucking word… [He's] still a big fan.

"I was actually in the dressing room afterwards, and one of the techs brought my guitar in. So I was just toweling my guitar down. I was putting it in the case and just getting changed. And all I heard was, 'Hey, Jeff.' I turned around, and there was James Hetfield.

"Say what you want about those [METALLICA] guys, but fuck, they have worked for their success," Jeff added.

In a 2012 interview with Rolling Stone, METALLICA guitarist Kirk Hammett said that he and his bandmates were "super-psyched" about embarking on their first European tour with VENOM. "I thought I was worldly, because I'd stayed in New York for a few months," he said. "But to go to Europe, for James, Cliff [Burton, bass] and I, the culture shock hit us pretty hard. It was the food, the language barrier, the fact that stores were opening and closing at different times of the day. On Sundays, you couldn't get anything. The television was different. You couldn't read anything when you looked around. We got over it after awhile, but it was so different than any of us expected.

"Six months previous to that, I was sitting in my Volkswagen, drinking vodka, driving over the Bay Bridge, cranking VENOM on my way to hear some metal bands play in a club in San Francisco. Now I'm on tour with them. It was quite a leap for me. I went from being an uber-heavy metal fan to being a heavy metal musician, to being in it."

Two years ago, VENOM frontman Conrad "Cronos" Lant looked back on his band's tour with METALLICA in an interview with Consquence Of Sound, saying: "It was a great time. And it was a good time for those guys to actually be able to hit the European shows.

"We were looking for bands like us, because, as we always said, we have a different crowd," he explained. "We [were] not pulling the same kind of crowd that would go and see… MÖTLEY CRÜE or whatever.

"A friend of mine used to have a bootleg stall, and he came to me one day with a VHS tape, and said, 'I've seen this band in San Francisco, and they are just like you guys.' And it was a METALLICA show, with Dave Mustaine wearing his [VENOM] 'Welcome To Hell' shirt. So, when we got the opportunity to get in touch with [Megaforce Records founder and former METALLICA manager] Jon Zazula and go over there, we said, 'There's a band on the other side of the country…' Now, we traveled 3,000 miles from England to New York, and those guys traveled 3,000 miles from the West Coast to New York, so that's fair — we'd meet in the middle. And then after that, I remember I told James that story, and he said, 'Oh no, no, no. There is a band that's really, really like you guys.' And that's when he told us about SLAYER. He said, 'There is a band in L.A. just like you guys.' And then from there on, it went from EXODUS and everybody started coming out — it was amazing.

"But the METALLICA boys, they're hard-working guys," Cronos added. "Fuckin' hell, I couldn't take that away from them. We were getting to the end of the 'Seven Dates Of Hell Tour' in Europe [in February of 1984], and we were all getting ready to go home and put our feet up and start working on the next record. And I said, 'What plans have you guys got?' And I remember Lars [Ulrich] said, 'We've lined up our own tour.' And I was, like, 'Wow, you guys never stop!'