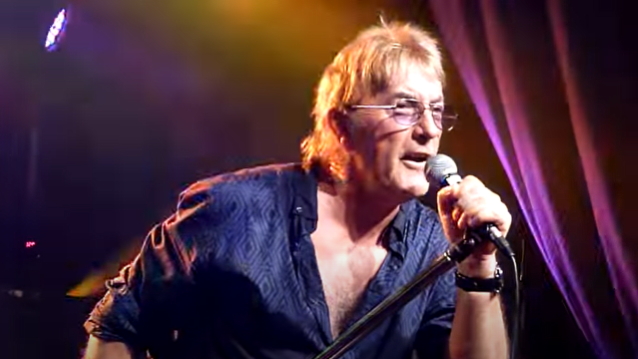 Earlier today, URIAH HEEP issued the following statement: "It is with deep regret that we share the devastating and tragic news of the sudden and totally unexpected passing of John Lawton on 29 June 2021.

"Contrary to reports, there was no illness involved, which makes his passing incomprehensible.

"He went peacefully with his wife at his side. John will be greatly missed.

"A private funeral service to celebrate John's life will be held following his wishes, with only family and close friends attending.

"We would appreciate that the family's privacy is respected during this difficult time."

Back in 2013, Lawton rejoined URIAH HEEP when they toured The Netherlands, Germany, Austria, Italy and Switzerland. Lawton reunited with the group to cover for Bernie Shaw, who required some time off for a routine medical procedure.

URIAH HEEP guitarist Mick Box shared a special memory of John from the late Seventies, saying: "One of my abiding memories is HEEP playing 'Wise Man' on 'Top Of The Pops'. If ever there was a song which did not give a hint of the band's hard rock background, this was it, and I was worried that we would be accused of selling out to commercialism. I needn't have worried, as John sang it so powerfully that he not only made the song his, hard rock fans loved it too."

Lawton began his musical career in North Shields, U.K., in the early '60s with THE DEANS, a bunch of kids who decided at random that John should be singer. He then moved on to WEST ONE and later to STONEWALL, which included John Miles, Vic Malcolm (later of GEORDIE) and Paul Thompson (later of ROXY MUSIC). After STONEWALL finished a stint at the Top Ten Club in Hamburg in 1969, John decided to stay in Germany. He was offered the job as singer with legendary German cult rock band LUCIFER'S FRIEND (1969-1976, 1979-1995) and subsequently recorded nine studio albums during his time with the band. In the early '70s, John also joined the LES HUMPHRIES SINGERS, with whom he recorded more than 20 albums and took part at 1976's Eurovision Song Contest.

In 1976, John joined URIAH HEEP as their frontman, and recorded the classic albums "Innocent Victim", "Firefly", "Fallen Angel" and "Live '79", and toured Europe and the USA until September 1979. During his longstanding career, John has worked with some big names of rock, on various projects, including Roger Glover's "Butterfly Ball" and Eddie Hardin's "Wizard's Convention II". In late 1980, he joined German rock band REBEL on three albums, including their hit singles "Line Of Fire" and "Eagles Flight". He would record one more album with the group, now known as ZAR in the early '90s. John ventured into the world of classical music when he recorded vocals for Volker Barber's "Excalibur". In January 1994, he formed GUNHILL, later known as JLB — JOHN LAWTON BAND. The band recorded two albums (studio/live) and toured Europe. In August 2000, John recorded his first solo album, the critically acclaimed "Still Paying My Dues To The Blues".

In December 2008, John entered the world of television by presenting the Bulgarian travel documentary series "John Lawton Presents", which led to the teaming of John and Bulgaria's Diana Express in November 2011 to record "The Power Of Mind" in Plevin, Bulgaria.

It is with deep regret that we share the devastating and tragic news of the sudden and totally unexpected passing of...