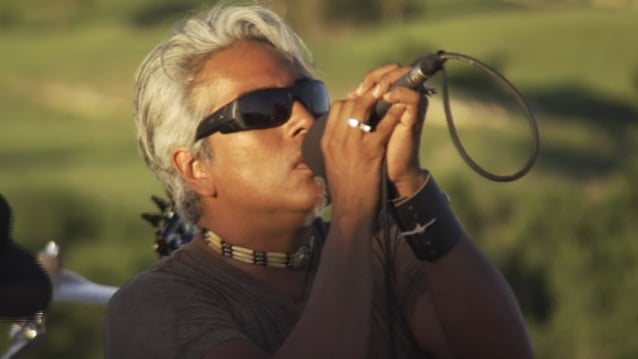 Acclaimed singer Gregg Analla (SLAVIOR, SEVENTHSIGN, TRIBE OF GYPSIES) was killed Thursday afternoon (January 4) when he lost control of his motorcycle and struck a curb in Albuquerque, New Mexico. He thrown from the bike after hitting the center median and was transported to the hospital where he succumbed to his injuries.

Officer Simon Drobik, a spokesman for the Albuquerque Police Department, told the Albuquerque Journal that Analla "was wearing a helmet at the time" of the accident, which occurred south on Unser just north of Montano NW.

TRIBE OF GYPSIES said in a statement: "It is with a very heavy heart that we have to announce the passing of our beloved brother, friend and band mate, Gregg Analla, who died in a motorcycle accident in his home town of Albuquerque on Thursday afternoon (January 4th, 2018). We are all shocked and heartbroken.

"Gregg, as you know, was a big part of the TRIBE OF GYPSIES for about five years starting around 1997 and we remained friends even after he moved back to Albuquerque. In '97, we had a record recorded instrumentally but no singer. Gregg's name had come up previously as a possible vocalist when TRIBE OF GYPSIES first started out and this time we decided to track him down in New Mexico. He was intrigued enough by the TRIBE to want to try out.

"He came out to L.A. and we took him into our home base, Joe Floyd's Silver Cloud Studios in Burbank. The first thing Gregg sang on was 'Summer Rain' and we instantly knew he was THE GUY. It was magic — he sounded as if he'd been singing with us for years! No need to look any further. So we completed what became 'Revolucion 13' and followed it up with 'Standing On The Shoulders Of Giants', aka 'Tribe Of Gypsies III'.

"The chemistry with Gregg was awesome — the creative juices were really flowing and we had a lot of laughs together. If you heard Gregg's infectious laugh, you'll never forget it. Good times, fun times… 'I got more chrome than Tony Iommi'.... we laughed so hard at some of the things we came up with! To top things off, we ended up getting a string of U.S. dates with the legendary SANTANA, which was an amazing experience, culminating in two shows in San Francisco and meeting Carlos backstage who very complimentary. It looked like we were finally on our way.

"But then we somehow hit a snag when we started working on the next album.... we laid down some tracks but never completed the record with Gregg who wasn't feelin' L.A. anymore and moved back to Albuquerque to be with his people. Things fizzled, the long-distance thing wasn't gonna work, but older and wiser, eventually, we started talking again about doing stuff together. Gregg was stoked, we were stoked. We made tentative plans to do shows in 2018… but now getting the word that Gregg is no longer with us is a crushing blow.

"Our deepest condolences to Gregg's family and friends — fly on to The Great Spirit, brother. We are forever grateful to have crossed paths and the chance to create some magical moments with you. With love, your brothers in TRIBE OF GYPSIES."

Analla, a descendant of the Isleta Pueblo Indian tribe, was most recently involved with legendary guitarist George Lynch's "Shadow Train" project which released a two-CD set in July 2015 via Rat Pak Records. Songs on the disc were also featured in Lynch's movie "Shadow Nation", a thought-provoking documentary that explores the trials and tribulations that face Native American Indians in our world today.

In a 2013 interview with Metal Assault, Lynch stated about Analla: "He's 100 percent Pueblo Indian. He's a curator at the Indian Pueblo Center in Albeqerque, and he's just a really talented guy. He's an artist, a sculptor, a speaker and all these kinds of things. So he's very knowledgeable about native culture and history and things lie that. And he's an insanely good singer. He's been in a lot of bands, bands that should have, could have, would have but didn't in the '90s [laughs], but people know who is. He's played with a lot of great people."