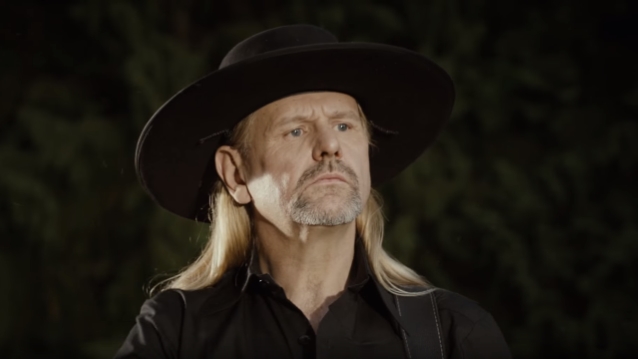 Former TNT vocalist Tony Mills has been diagnosed with cancer.

The British-born singer appeared on three studio albums from TNT — 2007's "The New Territory", 2008's "Atlantis" and 2010's "A Farewell To Arms" — before exiting and being replaced by a returning Tony Harnell.

Mills, who suffered a heart attack more than eight years ago, confirmed his latest health battle via a Facebook post earlier today.

The 56-year-old wrote: "Cancer. Not only my birthsign, but now also my fate. Recently diagnosed, but far too late.

"I have suffered since the end of last year, shortly after a car crash before Christmas, which halted my digestive system and left me with internal pain that was difficult to isolate or fully understand.

"Various hospital visits found nothing from tests until I took myself to a private clinic in Oslo, where the doctor decided I was too unwell for normal scopes and I was scanned the following day.

"A tumour too old and large to be removable had been growing inside me for a year or so and was the cause of all my problems. It seems to me that the car crash definitely accelerated the growth and/or effects of this entity, otherwise I may still not even be aware of it. So, that's that.

"Standing back from this for a moment, to look at my ensuing album release, I am grateful to the people around me that have been involved with my latest album, 'Beyond The Law', that will very obviously be my last written work as an artist.

"The timing was nothing short of a relief. I am glad it got finished in time. Certainly not least my wife Linda, Pete Newdeck, Tommy Denander, Toine Vanderlinden, Josh 'Tabbie' Williams, Tony Forsythe and Chris Aldridge on the studio level and Pete Kotevski from Battlegod Productions, Jon Løvstad, Alex Cooper, Avalon Music and Ivan Gunn for artistic support, finance and logistics.

"The record is delayed slightly, until June to help the different territories release simultaneously and assist the record in some success.

"I was planning a thirty-year anthology of solo material next year (1990-2020); I have spoken to some of my colleagues and they may well organise that.

"With regard to what will happen in the short term, I don't intend to do a lot; I gave up travelling after touring Spain three years ago, as I found it too tiring and it just felt like it was time to withdraw from such a public existence and get out of the spotlight. I have been a live performer in one fashion or another since 1978 and though many rockers paint the wrinkles and endeavour to recreate their long lost talents, that never interested me; I was always a believer in moving over for the youngsters and giving them their rightful opportunities while they were young and fit enough to do it with the energy that it requires.

"I have been writing and recording for three years, mainly for other artists, which I have enjoyed a lot and for whatever time I have left (which I will no doubt be told in no uncertain terms very soon). I intend to carry on that practice and work around the farm with my wife and the animals we love.

"With little more to say for now, I will remain as sociable as possible for as long as I can, until it renders me incapable and then my wife will inform everyone of the eventualities.

"Thanks for your support during my time as a singer/songwriter; I met and worked with many of my heroes and I lived the dreams from when I was a starstruck teenager, against all odds and the advice of parents and teachers, who were all wrong.

Mills toured the world with British AOR sensation SHY in the '80s and established himself as a versatile songwriter and session vocalist with a slew of U.S. artists during the '80s and '90s. While fronting TNT, he maintained an active solo career and continued being involved in session work.

Harnell, who fronted TNT during its most successful period, beat thyroid cancer in 2009 and later appeared in advertisements for the American Association of Clinical Endocrinologists in order to share his story and help educate others about the warning signs of thyroid cancer.

Not only my birthsign, but now also my fate.
Recently diagnosed, but far too late. I have suffered since the...