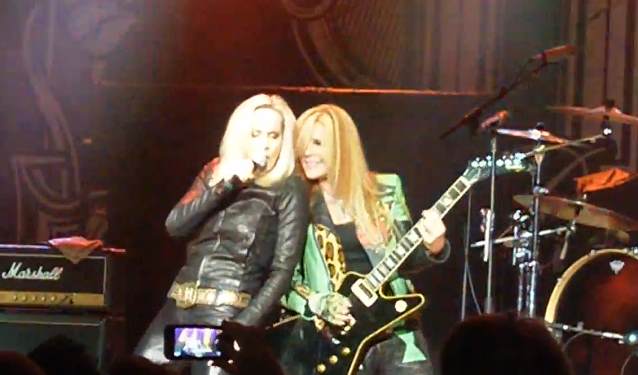 Former THE RUNAWAYS bandmates Cherie Currie and Lita Ford reunited on stage again on April 25 during Ford's set at the M3 Rock Festival at the Merriweather Post Pavilion in Columbia, Maryland to perform three THE RUNAWAYS classics: "Cherry Bomb", "American Nights" and "Queens Of Noise". Fan-filmed video footage of the performance can be seen below.

In an interview with Metal-Rules.com, Lita stated about the possibility of a RUNAWAYS reunion: "Well, Cherie and I talk all the time. We're all for it both of us. You know I'm friends with Vicki [Blue, bass] and I'm friends with Jackie [Fox, bass]. Of course, Sandy [West, drums], unfortunately, is not around, but Joan is the only missing link."

For the first time since 1977, Joan Jett, Cherie Currie and Lita Ford were in a room together on April 23, posing for cameras backstage at the Revolver Golden Gods awards where Joan was the first female recipient of the Golden God Award.

Ford last fall partnered with Currie to record a special holiday song. "Rock This Christmas Down" marked the first time Lita and Cherie recorded new music together since 1977.

The single was released on iTunes on December 3, 2013.

"I have dreamed, literally, of seeing Lita again for over three decades," Currie said. "Even after all that time, I still thought of her often.

"THE RUNAWAYS was something that was always left unfinished to me. Especially when it came to Lita, but I only knew her as a child.

"What floored me more then the unbelievable gift of working with her again was the woman she had become. She is the bravest, kindest, strongest, most loving human being I have met.

"Lita asking me to be a part of this amazing song and a part of her astonishing life has filled that void, that hole I had in my heart that maybe we both shared. It is now filled with love, support and admiration for a dear and wonderful friend whom I am so proud to say is Lita Ford."

Currie and Ford reunited on stage for the first time in 37 years on October 19, 2013 at the sixth annual Malibu Music Awards at Smothers Theater at Pepperdine University in Malibu, California to perform "Cherry Bomb".