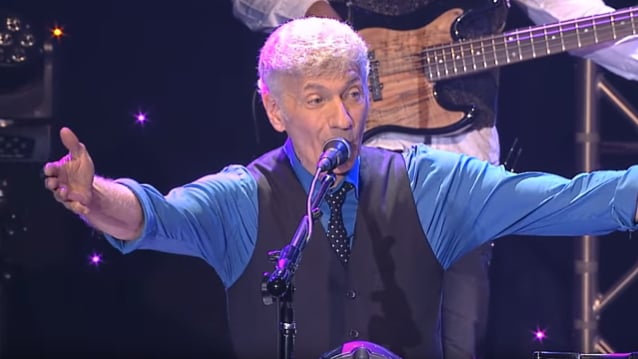 Former STYX frontman Dennis DeYoung will release his new album, "26 East: Volume 1", in the spring via Frontiers Music Srl. The LP will feature the duet "The Good Old Days" with Julian Lennon.

DeYoung has previously announced this will be his last album but has since issued an update.

"This was supposed to be my final album but there were so many songs written that Serafino Perugino, CEO of Frontiers, suggested dividing it into two albums rather than one," DeYoung states. "So be it. This is Volume 1, which sounds pretentious to me, but the marketing folks wanted you to know there are going to be two of them, so hey kids, there are two of them; this is Volume 1."

It all started when Jim Peterik, a fellow Chicagoan and nearby neighbor, sent a song demo to Dennis.

"If not for Jim Peterik's encouragement, talent and prodding I would not have recorded this music," said DeYoung. "He once told me that the world needed my music; to which I replied, 'Have the world text me for verification.' We collaborated from the get-go, happily and seamlessly, and at this time, we have written nine songs together, of which five will be on Volume 1. Just two Chicago guys doing what they do best, making music and having a laugh."

The collaboration with Julian Lennon came about when DeYoung wrote a verse and chorus of a song with Lennon in mind. Lennon heard the demo and said he would be honored to participate. Lennon's vocals were recorded in October at Mission Sound in Brooklyn, New York.

DeYoung shares: "The moment we sang together in the studio, it felt magical. I wrote the song specifically for our two voices. I had never met Julian previously, but I have been an admirer since 'Valotte'."

In support of the release of "26 East", DeYoung will tour heavily throughout 2020. To kick off the release of the album, DeYoung will appear at the House Of Blues Chicago on April 3, with a live concert and sneak preview of the album. A CD of "26 East" is included with the price of admission. In addition, the album will be played in its entirety on the house PA, followed by a question-and-answer session with DeYoung and Jim Peterik to discuss the new music. It will be followed by the live performance of the music of STYX. Attendees can expect to hear a few songs from the new album, also performed live.