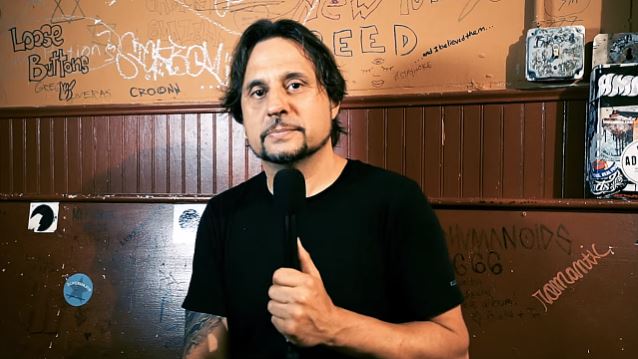 During an interview on episode 224 of the "Let There Be Talk" podcast with rock and roll comedian Dean Delray, Lombardo declined to reveal the reasons for his exit from PHILM, telling Delray (hear audio below): "I'm not gonna talk about it. They didn't want me to promote the band while I was with them, and I'm certainly not gonna do it when I'm without them."

Lombardo added: "I don't wanna talk about it anymore. Yeah, so I just said, 'See ya!'"

PHILM officially took form in late 2010 with a handful of tour dates and an early four-song demo that quickly began to make the rounds of in-the-know music critics.

In a 2014 interview with Journey Of A Frontman, Lombardo was full of praise for his PHILM bandmates, explaining that "it felt like a rejuvenation when I first got the band together in 2010."

He went on to say: "When you're in a band for more than 20 years, it becomes a job. There's hardly any communication with bandmembers — you rehearse with the band a couple of days before the tour, then fly back and that's it. You see them on stage but there's really not much to it."

PHILM released its sophomore album, "Fire From The Evening Sun", on September 16, 2014 (one day earlier internationally) via UDR.

Lombardo recently formed a new band called DEAD CROSS with members of THE LOCUST and RETOX. The group is currently recording its debut album with producer Ross Robinson, who has previously worked with KORN, DEFTONES, SEPULTURA and LIMP BIZKIT, among others.

To be clear I did not "exit" PHILM.I ENDED PHILM.Thanks to all who supported the band. @_Dead_Cross_ LP & Tour Dates Coming Soon. #truth