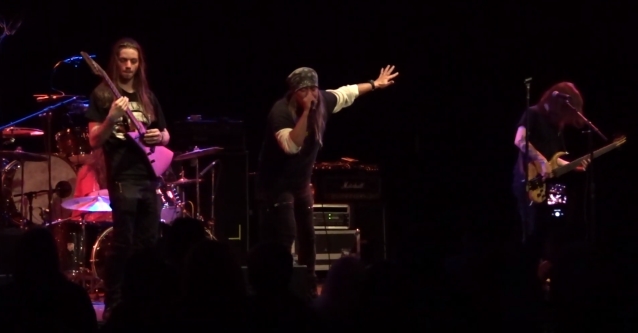 Fan-filmed video footage of former SKID ROW singer Johnny Solinger performing on December 20 at The Ballroom at Warehouse Live in Houston, Texas can be seen below (courtesy of YouTube user "txsurfer4u").

Solinger, who joined SKID ROW in 1999, was fired by the band in April 2015 and replaced by TNT singer Tony Harnell. Tony quit the group only eight months later, and was succeeded by the South African-born, British-based singer ZP Theart, who previously fronted DRAGONFORCE, TANK and I AM I.

SKID ROW bassist Rachel Bolan confirmed to the "One On One With Mitch Lafon" podcast that Solinger was kicked out of the band, contradicting the singer's claim that he "decided to leave SKID ROW to pursue [his] solo career."

Asked what led to Solinger's departure from SKID ROW, Rachel said: "It was evident. There were certain things going on out on the road that kind of set us thinking… Things had been going on for a little bit. And, you know, I'm not here to say anything bad about the guy.

"At certain times, you just get the feeling someone isn't putting a hundred percent into things," he added. "And SKID ROW is very important to the rest of us. And we wanted to carry on with quality performances and quality songs, so we decided to make a change."

Asked if there was ever a time where they felt things were "clicking" and "100 percent right" between Solinger and the rest of the band, Rachel told "Eddie Trunk Live": "We were clicking big time. I thought we made a lot of great music together. And even with [the ongoing trilogy of] EPs, when we were in the studio, we were making great music. Snake [guitarist Dave Sabo] and I would write, and everyone came in and really sunk in. I think it was when we were in the studio that it really became evident that we all didn't have the same heart and soul… We weren't all putting the same heart and soul into it. And it's just one of those things, man. It's rough to make a decision like this, but we did."

Added Snake: "This has nothing to do with Johnny not being a good person; he's a really good person, and we all got along well. There's no animosity at all from our end. And these are terrible decisions to make, man. They're awful. The guy's been with us for fifteen years, and we saw a lot of miles of road together, and I feel extremely fortunate to have spent that time in a band with him. And he's a great singer and he's gonna be fine. He's gonna pursue his solo stuff, I guess, and that's what he should do."