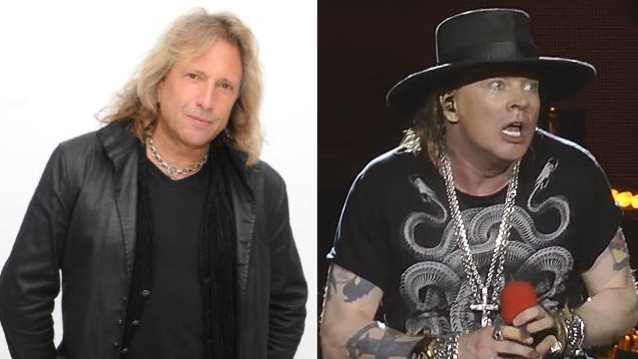 The musicians, who were born one year apart (1962 for Rose and 1963 for Affuso), got to spend a lot of time with each other when the two bands toured together in the early '90s. At the time, GUNS N' ROSES was promoting its landmark double release "Use Your Illusion" while SKID ROW was on the road behind its sophomore album, "Slave To The Grind", which holds the distinction of being the first heavy metal album to debut at No. 1 in the SoundScan era.

In a brand new interview with Orange Magazine, Affuso stated about Rose: "[I] could never quite understand the man. One day you thought you were friends and the next day he acted as if you didn't exist. [I'm] not saying this in a bad way. It's just who he was. [He was] also very serious at times. He loved to throw lavish after-show parties. And I loved to attend them!"

Although there have been several versions of SKID ROW since the band's classic lineup split in 1996, Affuso told Orange Magazine that he still hoped he could reunite with his former bandmates. "I'd like to do another stint, through new eyes older than 24."

The drummer previously told "The Jim Chinnici Radio Show" that the fact that SKID ROW's classic lineup can't reunite "really kills [him] on many levels." He explained: "We're all still alive, we're all viable, we're all still playing our instruments. So it's just very… it's sad. It's sad that we had that [and we can't bring it back]. We were less than one percent of the people on earth — we had this special thing — and it's been taken away."

Affuso is currently playing with FOUR BY FATE, in which he is joined by John Regan, Tod Howarth and Patrick James Gasperini.

The band's debut album, "Relentless", was released last June via Amazing Record Co. in Europe and The End Records in America.