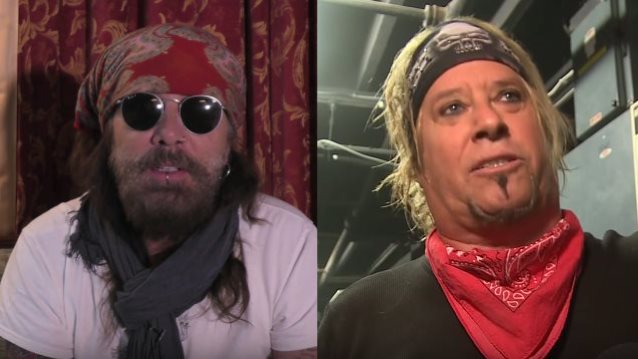 Former MÖTLEY CRÜE and current THE DEAD DAISIES singer John Corabi was interviewed on a recent installment of the "Music Mania" podcast. You can now listen to the chat below.

Speaking about his seven-year stint (2001-2008) as the rhythm guitarist in RATT, Corabi said: "I had a great run with RATT. I needed to do the thing with RATT, because I was kind of… I was so wrapped up… which you tend to do when you're in the music industry, you focus on [making] your music and [getting] it out, but then you're on tour, and you're, like, 'Well, how many tickets did we sell?' 'How many t-shirts did we sell?' 'How many miles do we have to go?' 'How much did the hotel cost?' You know what I mean? RATT was just a way for me to give myself… After THE SCREAM, MÖTLEY and UNION, I was becoming a little frustrated at the business end of being in [band], and RATT came along, and it was a way for me to kind of reset. I could still play music, I went on tour, I stood in the background, I lit my cigarette, I had my Guinness and my whiskey on the side of the stage, and I literally played my show. I was with my buddies right there; my partner in crime was Robbie Crane [bass] right next to me, and we did our thing, and I had a blast. Because I didn't have to worry about all the things that I… It wasn't my thing. So I just traveled the world, played music, I was a little land pirate, and I got my check on Friday. And it was kind of refreshing."

Asked for his opinion on the ongoing legal battle between drummer Bobby Blotzer and other members of RATT's classic lineup — singer Stephen Pearcy, bassist Juan Croucier and guitarist Warren DeMartini — over the rights to the group's name, Corabi said: "Without getting into too much, whatever, I'm not real happy with Bobby Blotzer right now. I did a gig with him, and him and I left the gig like… I walked in there… I just remember walking in, I bought him a drink at the bar, and then by the end of the night, we wanted to kill each other. So I'll just leave it at that."

THE DEAD DAISIES will hit the road in North America in August for a dozen prime live dates as part of their "Live & Louder" world tour, in support of their "Live And Louder" album, due on May 19. The trek will kick off in Chicago, Illinois on August 10 and will wrap in Las Vegas, Nevada on August 27.