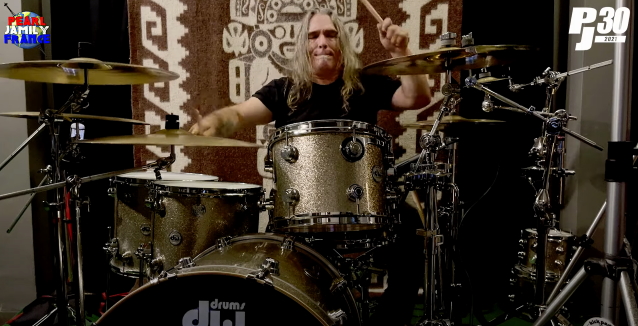 Former PEARL JAM drummer Dave Abbruzzese has teamed up with Pearl Jamily France to record a cover of the band's song "Rearviewmirror".

Dave and various members of the popular Facebook group got together virtually to perform the track, which originally appeared on PEARL JAM's second studio album, 1993's "Vs.".

Abbruzzese commented on the collaboration, writing on Facebook, "Sometimes you just have to say yes."

Abbruzzese joined PEARL JAM prior to the release of the band's 1991 debut album, "Ten". He also played on PEARL JAM's follow-up "Vs." and as the 1994 disc "Vitalogy", but exited the group prior to the latter album's release. Guitarist Stone Gossard later said: "On a superficial level, it was a political struggle. For whatever reason, his ability to communicate with Ed [Vedder, vocals] and Jeff [Ament, bass] was very stifled. I certainly don't think it was all Dave Abrruzzese's fault that it was stifled."

In the "Everybody Loves Our Town: A History Of Grunge" book, Abbruzzese is quoted as saying about his exit from PEARL JAM: "I got home and Mike [McCready, guitar] called and Jeff called. I think it was difficult for everybody in the band, except for the one person I never spoke with after that, which was Eddie. The only time I ever had two words with Eddie since I got fired was two or three years later. I was sitting with Alain Johannes from ELEVEN on the curb after a Chris Cornell show in Seattle, and Eddie came up to us. He said, 'Dave Abbruzzese,' and kinda put his arms out in greeting, because he couldn't hide from me. And I stood up and realized how much shorter he was than I remembered. I think it was a one-armed hug. He started rambling and tried to join in our conversation, and he ended up toddling off. There was a little part of me that would've loved to clobber him and another part of me that felt like I already had, just by the fact that I could still sleep at night and I was still proud of everything that we accomplished."

Only original PEARL JAM drummer Dave Krusen and current drummer Matt Cameron were inducted into the Rock And Roll Hall Of Fame along with the rest of the band in April 2017. Abbruzzese, Jack Irons and brief interim drummer Matt Chamberlain were left out.